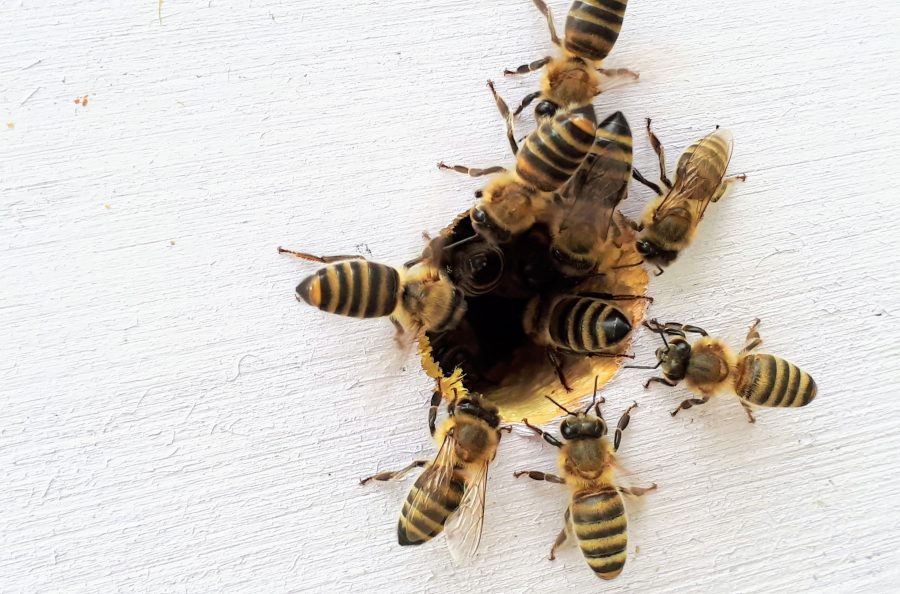 KIND’s almond suppliers are working on two major changes:  1) stopping the use of two types of pesticides (neonicotinoids and chlorpyrifos) that can kill bees and 2) converting between 3% to 5% of their orchards to a habitat that supports insects that naturally manage pests.

“As you know, there’s been an enormous strain on bee colonies,” said founder and executive chairman Daniel Lubetzky. “And given that almonds are the most important input into KIND products, we wanted to find a way to have a positive impact on bees.”

Of the 1.5 million-plus acres of almonds grown in California, only around 20,000 acres are currently bee-friendly. “We’re making this commitment to help catalyze and crystallize the movement towards these changes,” said Jenny Stanley, who manages sustainability at KIND.

KIND also worked closely with academic experts and growers to find solutions that would have a meaningful impact while being economically feasible. “Changing agricultural practices on a large scale is extremely difficult,” said Daniel Kaiser, director of western conservation strategies at Environmental Defense Fund, which is advising the company. “It takes thorough research into alternatives, incentives to overcome the cost of adoption, and a clear signal from the market that consumers are demanding change.”

Plant pollination by animals is critical for healthy ecosystems and an estimated 85% of the world’s flowering plants depend on animals, mostly insects, like bees, for pollination, according to USDA.

Pollination is essential to food security with roughly 35% of global crop production dependent on pollination by animals. Insect pollinators are in decline, with some estimates that 40% of animal pollinator species may be at risk of extinction worldwide due to threats such as habitat fragmentation and loss, use of pesticides, as well as diseases and parasites.

In fact, a collective of researchers found a  lack of wild bees and managed honeybees is limiting pollination and yields for certain crops on farms in British Columbia and across the U.S., reported CBC (July 29).

A study published in the Royal Society’s journal Biological Sciences used data from more than 130 farms to assess the pollination of crop flowers and yield for apples, highbush blueberries, sweet and tart cherries, almonds, pumpkins, and watermelon. Of those crops, the study found five frequently showed evidence of pollinator limitation.

The study noted that crops dependent on pollinators generate more than $50 billion each year in the U.S. and declining bee populations raise concerns about food security in years to come.

On some farms, “there was a tremendous amount of pollen limitation, meaning there were a lot of flowers not actually getting pollinated sufficiently to set fruit,” according to co-author Kyle Bobiwash.

In an earlier study Bobiwash was involved in, farms where crops had better pollination boosted yields by as much as 30%. “It amounted to thousands and thousands of dollars per acre, just because they had slightly better bee populations than other farms,” he said.

Another study by researchers from the University of Minnesota found that farmers sharing bees in the same way they share large equipment—such as tractors—could prove beneficial.

“Understandably, farmers with highly valuable crops don’t always want to give up plantable space to create habitats for wild bees, especially if their crops could be pollinated by a neighbor’s bees for free,” said Eric Londsorf, lead scientist for the Natural Capital Project at the University of Minnesota’s Institute on the Environment and lead author on the paper. “What we’re proposing is that those farmers providing bee habitat could be rewarded for doing so, to the benefit of all.”

The research found that if 40% of landowners were to provide space for wild bee habitat, those landowners would lose $1 million themselves, but generate nearly $2.5 million for their neighbors. The study proposes that if landowners work together so that those who benefited paid into the cost of the bee habitat, then everyone could come out ahead.

Meanwhile, PowerPollen, an ag tech company focused on improving agricultural productivity through improved pollination, closed its $13 million Series B funding round to accelerate global adoption of its pollination on-demand technology in corn seed production and expand innovation to corn grain, wheat, and rice.

The round will expand PowerPollen’s ability to help customers increase yield and enable product innovation across a wider diversity of hybrids.

The company’s pollination technology is the first to successfully collect, preserve, and apply pollen on-demand at commercial scale. Since its invention, the technology increased yield as high as 44% on commercial corn seed production acres and decreased environmental variation to improve risk management. In addition, PowerPollen’s technology improved labor and land utilization, while reducing seed discard.