New Jersey’s governor Phil Murphy stopped plans to restart his state’s indoor dining on July 2, postponing the move indefinitely after finding some restaurants were overcrowded and many patrons were not wearing masks, reported NorthJersey.com (June 29).

The New Jersey Restaurant and Hospitality Association argued the state is punishing the entire industry for the actions of a few instead of using enforcement.

After debating whether to do the same, New York City ultimately decided to also not allow indoor dining to resume as originally scheduled due to growing outbreaks in other parts of the U.S., Mayor Bill de Blasio and Gov. Andrew Cuomo said July 1, reported The Globe and Mail (July 1).

De Blasio mentioned he was concerned if the city welcomed diners back into the enclosed spaces of its restaurants, it might experience the same surge in illness being seen in these states. “Honestly, even a week ago, honestly, I was hopeful we could. But the news we have gotten from around the country gets worse and worse all the time,” he said.

Cuomo said the ban on indoor dining would be confined to New York City, where he complained that compliance with social-distancing guidelines is dropping. “This is a New York City-only modification because frankly it is a problem that is most pronounced in New York City,” he said.

De Blasio said that outdoor dining at restaurants, which started about two weeks ago, can continue. He said 6,600 restaurants in the city have applied for permits to serve patrons outdoors and he expects more to follow suit.

In California, bars, wineries, and indoor restaurant dining were shut down for three weeks in Los Angeles and 18 counties to address the concerning spike in coronavirus cases and hospitalizations, reported The Wichita Eagle (July 1).

“The bottom line is the spread of this virus continues at a rate that is particularly concerning,” Gov. Gavin Newsom said. To encourage more adherence to health rules, Newsom said the state is also creating “strike teams” of state regulators to more aggressively go after non-compliant businesses.

Additionally, Virginia did not allow restaurants to fully reopen their bars as it moved into Phase 3 of the state’s reopening on July 1, reported Richmond Times-Dispatch (June 30). Phase 2 rules will continue to apply to bar areas, permitting limited table service and prohibiting customers from sitting at bar counters.

“I am watching what is happening in other states, we are taking a cautious approach as we enter Phase 3 and maintaining the current restrictions on bar areas,” Northam said in a statement.

Closing drinking establishments, in particular, to stem the surge of COVID-19 infections is a move backed by sound science about risk factors that go beyond wearing or not wearing masks, reported U.S. News & World Report (July 2). According to one study, it comes down to the danger of “heavy breathing in close proximity.”

Crowded indoor spaces filled with people yelling, leaning close to hear one another, and touching the same sticky surfaces are “the opposite of social distancing,” said Dr. David Hamer of the Boston University School of Medicine.

McDonald’s started offering limited, dine-in service in May, and around 2,200 of its 14,000 U.S. restaurants now allow customers to eat their meals inside. Restaurant owners that began offering dine-in service can continue if their jurisdiction still allows it, according to company letter.

“Our resiliency will be tested again. COVID-19 cases are on the rise,” remarked Joe Erlinger, McDonald’s U.S. president, and Mark Salebra, head of the National Franchisee Leadership Alliance owners association, in the company letter. 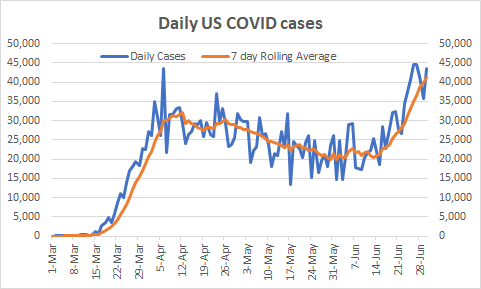 Delivery Landscape Changing as DoorDash, Rivals Go All in on Alcohol

Scroll To Top The Food Institute