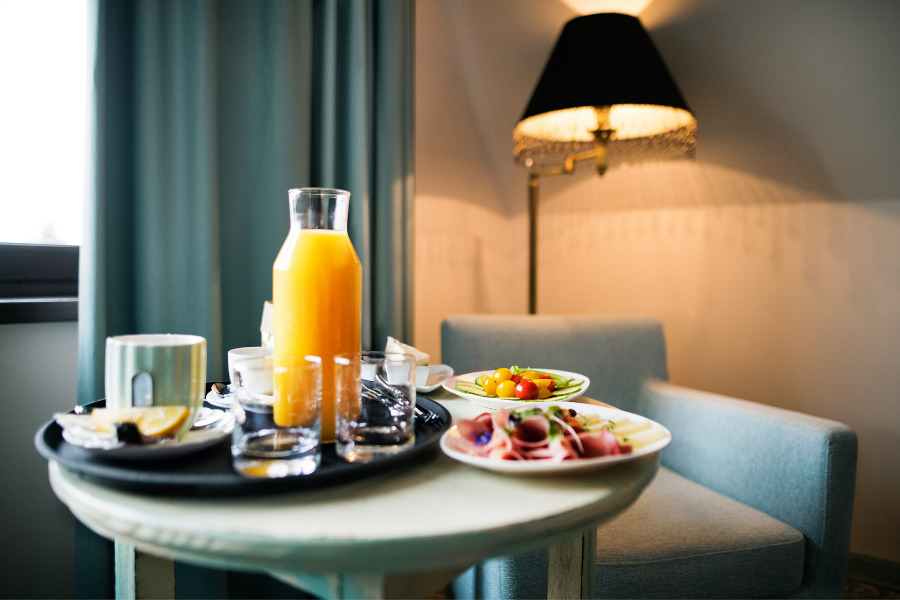 Hotel occupancy in the U.S. fell to a record low 44% in 2020, according to travel research firm STR.

“2020 was a complete wash due to international travel restrictions amongst various countries and also within major corporates for domestic businesses,” said Glaxon Geevarghese ­­­­­Complex Director of Sales at Highgate Hotels in an interview with The Food Institute.

That fact inspired some unprecedented partnerships among hotels and restaurants across the country.

Some restaurants have begun using hotel rooms as private dining spaces during the pandemic, reported The Washington Post (Feb. 3).

At the Detroit Foundation Hotel, which partnered with Detroit’s Apparatus Room restaurant, customers can pay $50 for the use of a room, order through the phone and call when they are ready for their courses. Servers then leave dishes on a tray outside or inside the door, and masks are required when anyone comes in.

For guests dining at the Sofitel Washington DC Lafayette Square, there is no fee for the room, but anyone who wants to order from the “enhanced private dining menu” must spend at least $70 on food and drinks.

Ghost kitchens, which have taken off even more throughout the pandemic, have found a new home in hotels. C3 (Creating Culinary Communities) will take over foodservice operations in six Graduate Hotels by mid-2021, reported Restaurant Business (Feb. 1). The company will transform kitchens into shared spaces for up to six brands. The menus will be available for delivery via third-party apps and eventually a C3 app.

Analysts estimate that fewer than 5% of hotels in the U.S. are operating ghost kitchens from within their properties, but the number is expected to grow. “Hotels see this as a profit center,” Frederick DeMicco, executive director for Northern Arizona University’s School of Hotel And Restaurant Management told The New York Times. “It supplements the existing menu options at the hotel, and extends well-respected restaurant brands as partners in the hotel.”

WILL THESE PARTNERSHIPS LAST BEYOND THE PANDEMIC?

The partnerships restaurants and hotels have formed during the pandemic have been beneficial to both parties, as well as consumers looking for ways to dine out. But will they last?

“The road to recovery for hotels and restaurants are comparatively much longer and slower as compared to previous crisis of 9/11 and the 2008-09 financial crisis combined,” said Geevarghese. “Successful partnerships between hotels and restaurants are achievable with those hotels which have in-house or at site restaurants.” However, Geevarghese believes various other legal concerns could still create issues regarding these types of partnerships.

When it comes to ghost kitchens, Geevarghese noted that survival of the fittest was key for those offering that type of service. “Hotels leasing out the current vacant kitchens and banquet space to restaurateurs with cut-rate price could be good composition for both hotels and restaurants in future days,” he said.

Ann F. Peterson, General Manager of The New Yorker also noted that ghost kitchens will last “only if it is a themed concept and the location of the hotel is near a great number of apartments,” in an interview with The Food Institute. “I also do not believe that the unions will be willing to acquiesce to this on a long term basis. I also believe there is a pent up demand for people to go out and that that will be the greatest need to be fulfilled,” she added.