Plant-based products continue to proliferate across the industry despite significant barriers to adoption, including taste and affordability.

“We find in our business that oftentimes when there’s a really big trend, eventually there’s a push back to that trend,” said registered dietitian Marie Molde in a recent webinar by Datassential. “But [plant-based] has been a trend for so long, it’s just part of our world now. It’s part of what the food and beverage industry is.”

This push back largely thrives where most of the plant-based conversation has centered over the past several years — the roller coaster market of alternatives that mimic traditional animal-based food.

But what do consumers really want to eat? 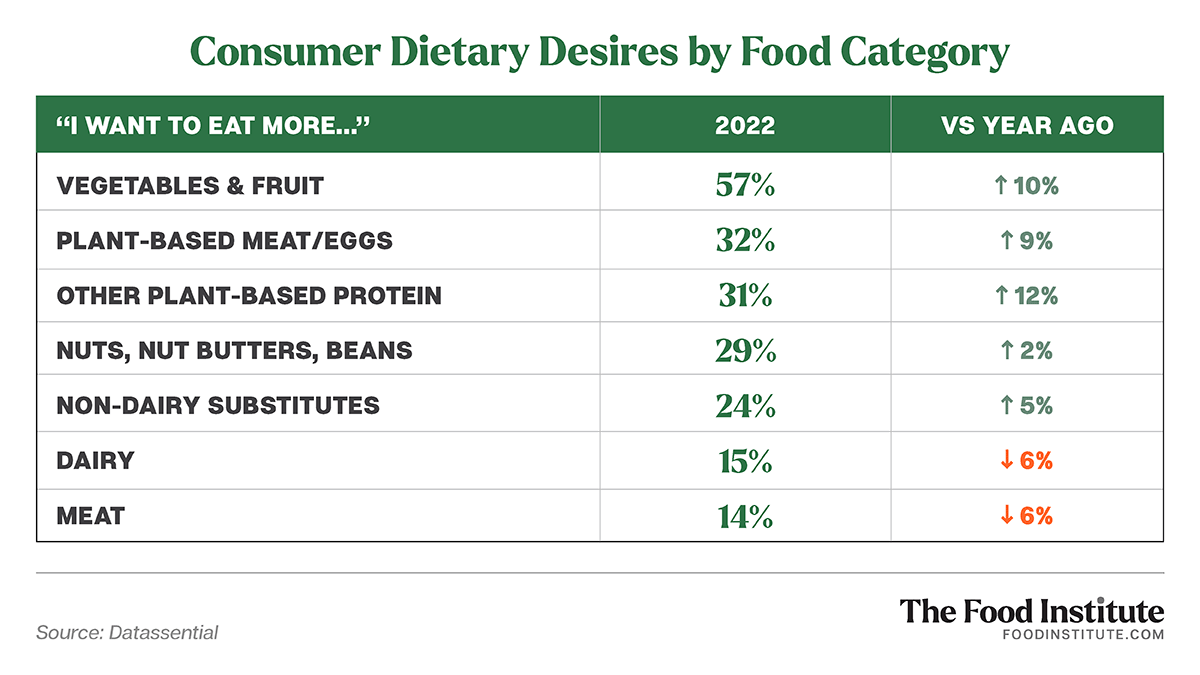 A recent Datassential survey shows that most respondents like the whole food element of plant-based offerings, but a sizable number of consumers said they liked alternatives as well.

“It doesn’t have to be either / or,” said Molde. “There’s consumer interest in both of those options today.”

According to Datassential, 71% of Americans identify as being meat eaters, followed next by the biggest group of eaters, flexitarians (22%), who don’t eliminate meat from their diet but focus on eating less. This group is also joined by other meat-limiting diets including vegetarian (3%), pescatarian (2%) and vegan (2%).

“When you add those up together, it’s almost a third of our population today who are limiting meat in their diets in some way,” said Molde.

“When we look at people’s eating habits, we certainly have reason to believe that we’re seeing a shift away from meat and into eating more plant-based foods,” said Molde.

“Sixty-five percent of consumers believe that we do have the ability to mitigate climate change and help our planet by simply eating differently,” said Molde. “That is a powerful statistic.”

Noteworthy developments that align with plant-based category movement include:

“Most of us do who consume meat in some way, but a lot of us also have aspirations and goals to eat more plant-based foods,” said Molde. “So there’s a great opportunity in this space to have mostly plant-based foods but also a small amount of meat or dairy in there as a garnish or as an additional flavor element.”