As a variety of factors aggravate the downward trajectory of alternative meat sales at retail, refrigerated varieties continue to fuel the category’s deceleration.

Sales of refrigerated meat alternatives were down 10.4% for the 52-weeks ending September 18, according to IRI. 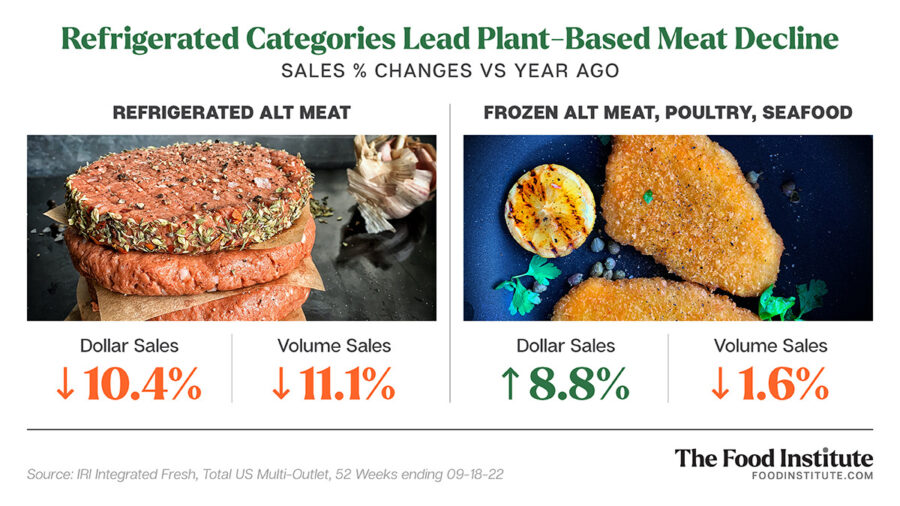 Inflation remains the undercurrent across all categories in food retail, with August food and beverage prices up 14.3% year over year, and fresh perimeter categories including traditional meat are feeling the pinch as consumers spend less, Anne-Marie Roerink, President of 210 Analytics, told The Food Institute.

However, price hikes in the meat case haven’t generated any new traction in plant-based alternatives. “At the end of the day, they are still more expensive,” said Roerink.

Overall, sales deceleration across plant-based meats has been on-going.

“After strong growth on a small base for about two years, gains dropped in the negative in the second half of 2021 and have fallen a bit more every month despite prices remaining stable,” said Roerink. “The decline lies in dropping household penetration at retail that has fallen below 10% again. With the repeat rate low, the sales and velocity cannot keep pace.”

While higher prices are the top reason for the slide, Deloitte believes the faux meat industry is suffering from a perception problem, with a growing cultural resistance to its “woke” status, reported Bloomberg. 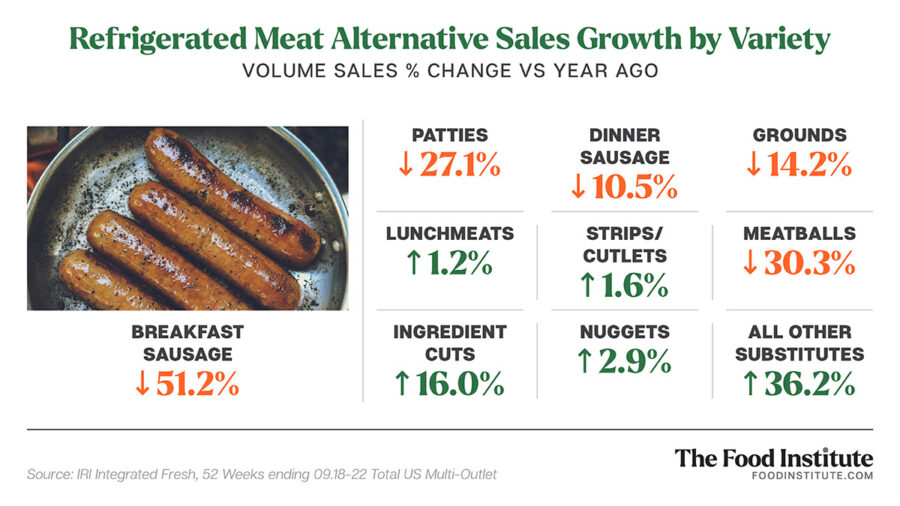 As Roerink notes, August is the one summer month without a significant grilling holiday, which could relate to the pullback on beef and other meat purchases.

“All of us have different backgrounds and cultures that define the way that we eat,” said Ben Davis, VP of Content at Plant Based World in a recent FI Interview.  “Something like a burger patty, it’s a little challenging to get that to be accessible to everyone because it only is relevant to certain food cultures.”

While volume sales for frozen meat, poultry and seafood alternatives were also down in August, the department continues to fair better for plant-based.

As Roerink notes, frozen was the original home of plant-based burgers and some retailers have opted to relocate fresh items to the freezer, where shelf life is less of an issue. “Frozen meal solutions also have an ample assortment of plant-based options, which may mean better alignment with the shopper mission,” she said.

“The outsized growth in frozen is mostly a reflection of inflation, not demand,” said Roerink. “That said, frozen has done well altogether throughout the pandemic and its core shopper is the millennial who is also the core plant-based meat alternative shopper.”