Apr 14, 2020
Delivery Not Doing as Well as Expected
By Victoria Campisi 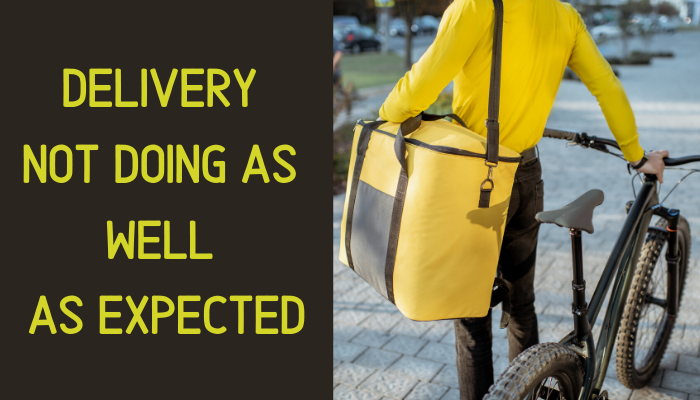 Although Americans sheltering in place might seem like it would benefit food delivery companies, such as Grubhub, that is not the case.

Grubhub was hit harder in New York City than anywhere else in the country, reported Chicago Business Journal (April 13). "In New York City our consumer business was affected more than in other metro areas due to the severity of the COVID-19 impact in that market," said the Chicago-based company. "We believe this is due to a number of factors, including New York City residents choosing to temporarily leave the city and/or cooking at home more often, as well as more local restaurants deciding to pause operations because of the temporary drop in demand."

Overall daily deliveries ended up "flattish" because of the situation. Although, Grubhub said the second quarter was starting out well around the country and daily average deliveries were up 10%. "In markets more affected, New York in particular, we have seen a stabilization in consumer orders, and even some improvement from the low points observed in March, but New York orders remain below pre-COVID volumes," the company said in its statement.

Grubhub plans to reinvest most of the profits it expects to generate during the quarter into programs that drive more business to restaurant partners in several forms, including numerous diner promotions, reduced or eliminated diner delivery fees, platform improvements, as well as products and procedures to keep all involved safe.

However, a proposed class action lawsuit filed against Grubhub, DoorDash, Postmates, and Uber Eats is accusing them of using their market power to stop restaurants from discounting meals to customers who order directly, reported Bloomberg (April 13).

The New York-based customers claim the delivery services charge "exorbitant fees" that range from 13% to 40% of revenue, while the average restaurant's profit ranges from 3% to 9% of revenue. “Restaurants could offer consumers lower prices for direct sales because direct consumers are more profitable,” the plaintiffs said. “This is particularly true of dine-in consumers, who purchase drinks and additional items, tip staff, and generate good will.”

In San Francisco, the city is limiting how much third-party delivery platforms can charge local restaurants during the COVID-19 pandemic, reported Business Insider (April 10). These companies will be allowed to charge no more than 15% commission throughout the state of emergency, or until restaurants can resume serving dine-in customers.

"Restaurants across San Francisco are struggling to stay open," said San Francisco Mayor London Breed. "In these tough financial circumstances, every dollar counts and can make the difference between a restaurant staying open, or shuttering."