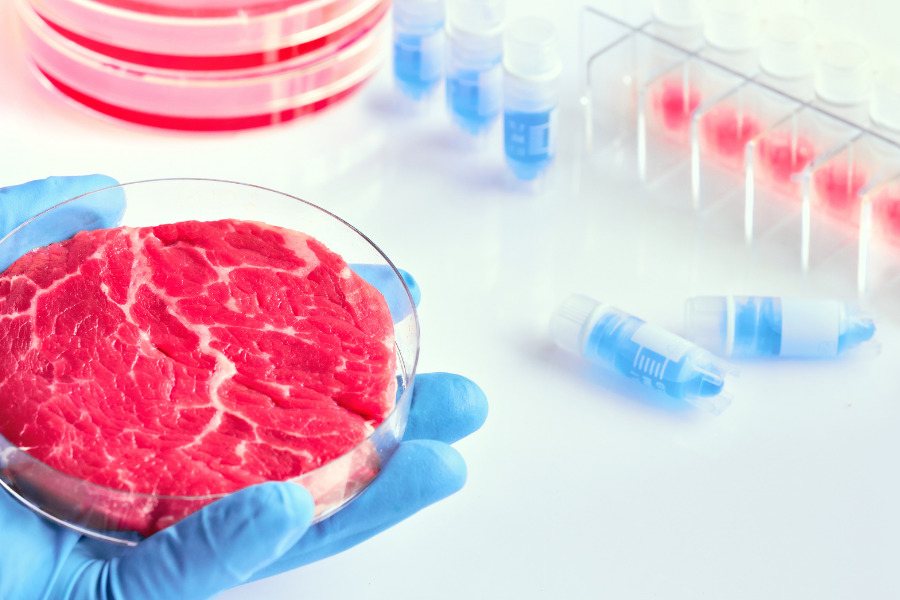 Amazing breakthroughs in the world of food are becoming available to consumers daily. While plant-based food innovation is ramping up, another area gathering steam is cell-cultured meat production in labs.

The Food and Agriculture Organization of the United Nations (FAO) reported that world food prices rose for a sixth month running in November, hitting almost a six year high with the index posting its biggest monthly increase since July 2012. The FAO also estimates the demand for meat is going to increase dramatically over the next 30 years and that current production methods are not sustainable.

Some experts say cultured, or cultivated, meat could cut the amount of land used for production by 95% and the amount of greenhouse gas emissions by a minimum of nearly 75%. This is where cultured meat comes in.

Earlier this week, Israel-based Meat-Tech 3D announced that it had succeeded for the first time in printing a cultured beef fat structure composed of bovine fat cells and bio ink, which were grown and developed from stem cells in its laboratories. The printing of beef fat and the bio ink created an edible structure that reached a height of 10 millimeters.

The company says this represents a step forward, following its previous milestone of 3D printing a uniform, thin tissue of meat derived from stem cells.

“Expediting the development of a broader range of cultured fat options will accelerate our go-to-market plans and support our current activities while opening the door to new product opportunities,” said Sharon Fima, CEO and CTO of Meat Tech.

Ultimately, Meat-Tech believes such 3D bioprinting will include additional components, such as muscle cells. The real meat tissue based upon the cell growth, cell differentiation, and bio printing technologies the company is developing is designed to leverage cellular agriculture while avoiding the need to raise and slaughter or otherwise harm animals. Its plan is to develop an industrial process aimed at providing commercially-scaled production volumes.

Meanwhile, San Francisco-based Eat Just, Inc. announced this week that its cultured chicken was approved for sale in Singapore as an ingredient in chicken bites. The company has developed other cultured chicken formats that will be an extension to this product line.

“Singapore has long been a leader in innovation of all kinds, from information technology to biologics to now leading the world in building a healthier, safer food system. I’m sure that our regulatory approval for cultured meat will be the first of many in Singapore and in countries around the globe,” said Josh Tetrick, co-founder and CEO of Eat Just.

“Working in partnership with the broader agriculture sector and forward-thinking policymakers, companies like ours can help meet the increased demand for animal protein as our population climbs to 9.7 billion by 2050,” he said.

In terms of the big picture, what’s the general consensus of American consumers regarding these potential new food options?

As for consumer acceptance, “It doesn’t matter how efficient or cost-effective our technologies are, or how smoothly the regulatory path functions if nobody’s interested in the products,” noted KC Carswell, PhD, VP process development, Memphis Meats.

However, Carswell said research suggests that “roughly two-thirds of U.S. consumers would eat cell-based meat and many of those consumers are already planning on eating it regularly. Massive segments of the population in countries throughout the world are hungry for cell-based meat.

Importantly, Carswell stated that producing cell-cultured meat can be done without antibiotics, which is a real plus, given concerns about the use of antibiotics in the conventional meat industry and its contribution to antibiotic resistance.