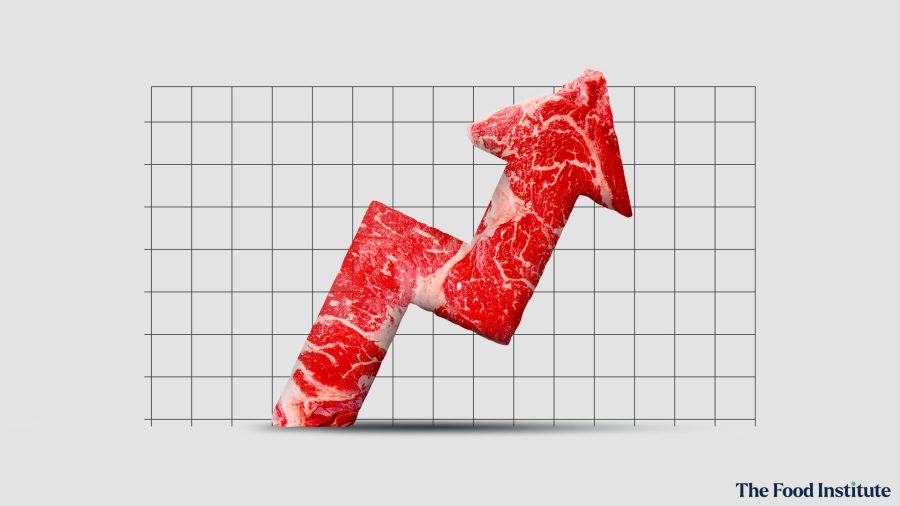 Beef prices are up, but relief could be on the way.

Retail beef prices rose 30% from the beginning of 2020, before pandemic lockdowns started, to a peak of $7.90 per pound in October, before declining slightly in November and December, according to U.S. Department of Agriculture data.

With that, the U.S. has the fewest beef cows in seven years, USDA said earlier this week, signaling that high meat prices will continue to rise. The beef cow herd totaled 30.1 million head as of Jan. 1, down 2% from a year earlier and the lowest since 2015. All cattle and calves totaled 91.9 million head, also down 2% from a year ago. (Reuters, Jan. 31)

A continuing labor shortage and other supply chain constraints are also providing support for higher prices.

However, recent developments could be a good sign for consumers.

The latest labor data forecast on consumer prices for food signals price gains slowing down.
Even though the price for beef and veal for December 2021 was still 18.6% higher than it was in December 2020, they are forecast to only rise 3% to 4% in 2022.

“We think food inflation will peak somewhere in the spring or summer as you begin to see some of the issues food companies faced in the early part of 2021 lapse with a lower run rate in the back half of the year,” Peter Galbo, a food and beverage analyst with Bank of America, told ABC News.

President Joe Biden has announced steps to boost competition in beef, pork and poultry processing to curb what he argues is “exploitation” of consumers and farmers.

Earlier this week JBS said it agreed to a $52.5 million settlement in a beef price-fixing lawsuit.

Colorado-based JBS didn’t admit any wrongdoing as part of the settlement, and company spokeswoman Nikki Richardson said JBS will continue to defend itself against other plaintiffs in the case, but she said JBS decided the settlement was “in the best interest of the company.”

A federal judge reviewed the settlement at a hearing Thursday and will rule later whether to approve it. The plaintiffs’ attorney, Dan Gustafson, said the deal could serve as an “icebreaker” in the case that could lead to additional settlements in the case that also involves Tyson Foods, Cargill and National Beef. Those three companies, along with JBS, control more than 80% of the U.S. beef market. (The Associated Press,  Feb. 2)