After decades of being sidelined by consumers concerned over whether they were safe, foods made with genetically modified organisms, or GMOs, may finally find a place on more meal plates along with other new agricultural biotechnologies aimed at making plants drought- or flood-tolerant and increasing yields.

The changing climate and growing population are pressuring the food system, experts said. At the same time younger generations like Gen Z are interested in the environment and sustainability and are more likely to be open to eating food created with new technologies that could boost yields.

“Consumers should think less about the technology and more about what we can do to enhance the sustainability of agriculture,” said Pamela Ronald, PhD, professor in the department of plant pathology at the University of California at Davis. “There will be different technologies, now and into the future. There is a critical challenge to feed the growing population without destroying the environment.”

Dr. Roland and her colleagues developed a rice that can withstand the heavy flooding in Africa and Asia and increase yields. She coauthored a paper entitled “Crop Biotechnology and the Future of Food” that appeared in the May 19 issue of Nature Food on genetic tools to help increase food production.

“By 2050 the global population is predicted to reach 9.7 billion. Meeting this higher food demand, if consumption practices and food waste do not change, requires estimated food production increases of 25% to 200%,” she wrote. Cultivated crops using food technologies are part of the solution, she said.

Meanwhile, anti-GMO groups including the Organic Consumers Association in Finland, MN, and the Institute for Agriculture and Trade Policy in Minneapolis, MN, argue there isn’t enough research yet on GMOs to assure they are safe to eat.

Some companies even use a “non-GMO” label as an advantage when marketing to consumers. Meat alternative company Beyond Meat utilized that label to distinguish itself from competitor Impossible Burger, which uses two genetically engineered ingredients: soy leghemoglobin and soy protein.

However, debates over GMO or non-GMO labeling are unlikely to fundamentally change consumers’ views of GMOs, said William Hallman, PhD, professor and chair of the Department of Human Ecology at Rutgers University, New Brunswick, NJ.

“Sales of the Impossible Burger don’t appear to be flagging because people are concerned about the fact that it has GMO-based ingredients,” he said. “In fact, it is more likely that people are attracted to the idea that both the Beyond and Impossible burgers are ‘plant-based,’ which creates a ‘health halo’ around the products.”

He mentioned most consumers will freely admit they know little about GMOs or gene-editing technologies, so they are not changing their habits about eating GMO foods.

One of the pioneers of GMOs was Norman Borlaug, PhD, who in the 1950s created a disease-resistant, high-yield, semi-dwarf wheat that fed millions of people in Mexico and South Asia.

GMOs continue to be used to relieve famines and get more crop yield out of available land. In January, Zimbabwe quietly lifted its 12-year-old ban on GMO corn in an effort to avert a severe famine, according to Bloomberg News.

The current and anticipated challenges to the food system aren’t lost in the U.S. Three federal agencies in March got behind an effort to educate consumers about GMOs. The U.S. FDA, USDA, and EPA launched the Feed Your Mind program, which aims to answer questions about what GMOs are, how and why they are made, how they are regulated, and whether they are healthy and safe.

A GMO is a plant, animal, or microorganism that has had its genetic material modified, including transferring DNA from one organism to another. Apples, potatoes, and soybeans are among the many genetically modified foods that are available in supermarkets.

“While foods from genetically engineered plants have been available to consumers since the early 1990s and are a common part of today’s food supply, there are a lot of misconceptions about them,” FDA Commissioner Stephen Hahn, MD, said when the initiative was launched. “This initiative is intended to help people better understand what these products are and how they are made. Genetic engineering has created new plants that are resistant to insects and diseases, led to products with improved nutritional profiles, as well as certain produce that don’t brown or bruise as easily.”

The COVID-19 pandemic could have a role in consumer awareness of potential food shortages, even though distribution issues may be at the root of the problem now, said Oliver Peoples, PhD, president and CEO of Yield10 Bioscience of Woburn, MA, a company that uses the gene-editing technology CRISPR and other technologies to improve crop yields.

“The public has gone to the grocery store and seen empty shelves, including basic staples like meats, chicken, and eggs,” he said. This has forced many consumers to try genetically modified products that they might have not typically opted to buy before.

Furthermore, the Millennial and Gen Z generations are making a big difference in the acceptability of food made with technology because they are very focused on climate change and sustainability, said Dr. Peoples.

Marketing company Ketchum found that 77% of Gen Z consumers it polled are likely to try food made with technology and 71% are comfortable with its use to grow food (see Food Tech Consumer Perception table below).

“This bodes well for food companies, as Gen Z is the newest generation of food consumers with purchasing power,” said Bill Zucker, managing director of food at Ketchum. 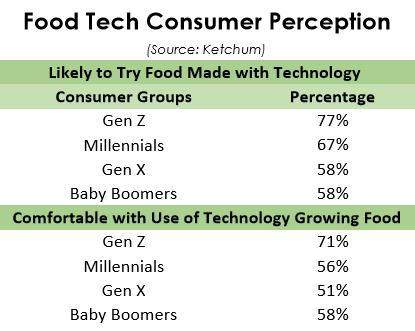 By Lori Valigra, journalist based in Harrison, ME. Reach her at valigra@gmail.com.