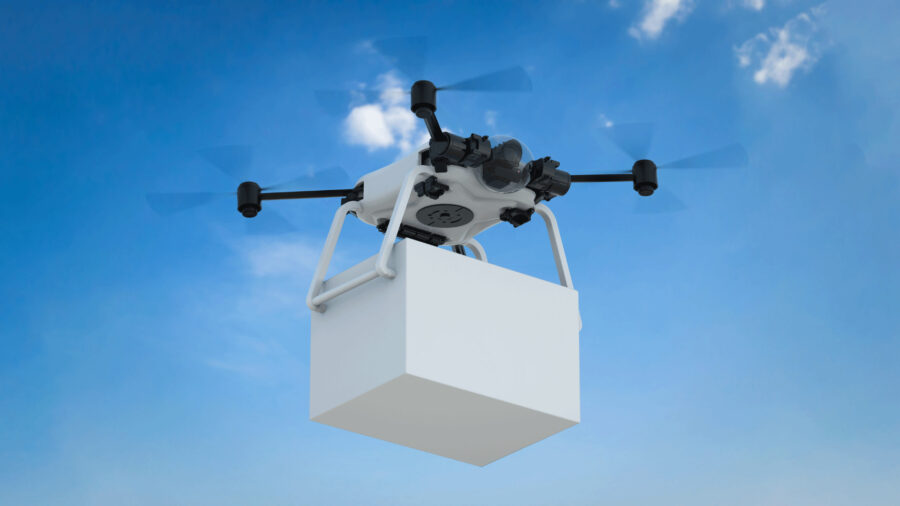 I look out my window and it’s a cascade of billowing whiteness; a swirling, snowy blanket that has blanked our mobility, blanked our ability to send our kids to daycare, blanked my wife’s workday, blanked the city’s ability to even plow us out until the blizzard subsides.

Most importantly, it blanked the kids’ Pizza Night, which is tonight, Wednesday, every Wednesday, and delivery is simply not an option, not even here in the suburbs south of St. Paul, Minnesota, and the frozen Mississippi River.

It’s a perfect storm, in other words, for drones.

Drone-based delivery is gaining footholds in pockets of commerce around the country. From suburban shopping centers near major airports and cities to single-lane, 55-mph, blink-and-you-might-miss-’em towns with one, singular solution for grocery, retail, goods, and services, drone delivery can offer a more efficient, safer, and most of all less expensive option for restaurant and retail.

For many consumers, drone-based apps offer the same service (and possibly greater value) for delivery than brands like DoorDash and Instacart, which just lowered its valuation another 20%. For consumers in areas with drone-based services, it may make more sense to look to the sky (and not across the driveway) for their tacos, pizza, and more.

“There are a number of opportunities for both retailers and consumers in the drone delivery space,” said Eyal Yair, CEO of 1MRobotics, in an interview with The Food Institute.

Once touted as the future of small-volume delivery, drones have come a long way since their post-millennium debut as both tool and toy, and many companies and brands now offer drone delivery services as an alternative to eat-in, takeout, and delivery – or at least what we thought of as conventional delivery.

“The first few times they’re excited about the drones – they bring their families out and take video. By the third or fourth time, it’s just part of their day.”

Flytrex is one of several delivery companies in America that specializes and focuses on drone-based approach to delivery and revenue. Bash feels the future is already here – “It’s just not evenly spread” – and that sentiment applies to exactly where you might be able to get your food via drone; not all states allow it, including Minnesota, so Pizza Night via drone is not an option for me.

“We are the largest home drone delivery service in the west,” Bash said, citing over 21,000 deliveries in 2022 spread over five stations in North Carolina and Texas. Each station has two active drones plus a backup. Flytrex recently received approval to double its range, which Bash believes will quadruple its market. Flytrex drones are certified by the FAA as aircraft and stress safety, efficiency, and reliability.

“Whatever you can get via DoorDash, we can deliver it faster and for a more affordable price,” he continued. Bash said using humans is prohibitively expensive. Even more, it’s much less safe and far less efficient.

“You may have a minimum-wage employee driving a vehicle at excessive speeds, listening to the radio or their phone, texting, maybe working on the next order or imagining the best route; drones have none of that.”

Instead of moving a one-ton vehicle with a walking liability to deliver a taco, in other words, rely upon a 35-lb. drone that has one directive – find the delivery location, drop the food safely, and leave with neither interactions nor complications.

Drone delivery is a big business and will only grow. Earlier this year, Walmart announced its customers in Texas, Florida, and Arizona will be able to use drones for same-day delivery with up to 10 pounds of goods – “If it fits, it flies” – for a standard delivery fee of $3.99. There is no minimum order threshold.

Amazon still anticipates more drones in its future as well and a recent report published by the FAA found “no significant impact” in safety or privacy with its Texas-based deliveries.

Like other urban-based drone hubs, the five stations of Flytrex are in shopping centers or in/near small towns to maximize delivery efficiency. The company uses human runners to get the food – same as DoorDash – who then simply load the orders into the drones. From there, the human element is eliminated.

“It’s a lot faster than anything else out there today,” Bash said, citing an average delivery time of three and a half minutes.

“Today, traditional on-demand services may charge up to 30% of the food item for delivery, and those restaurants are not making a 30% margin on the food they sell,” Bash said. “It’s a huge pain on the vendor side coupled with huge demand on the customer side.”

And demand for drone-based delivery will only continue to rise. Two-thirds of the country’s population lives in or near urban city centers where an autonomous aerial delivery system that operates high above the highways, byways, and side streets of urban architecture – without all the liability, distractions, and opportunities for human error, much less parking spot complications – could mean something like Pizza Night endures, ensuring faster, cheaper, safer, and more reliable delivery.

What’s the motto of the United States Postal Service, again? “Neither snow nor rain nor heat nor gloom of night stays these couriers from the swift completion of their appointed rounds.”

It may be time to reassess to whom (or what) that motto applies. Until Minnesota and many other states change their regulatory approaches to drone delivery, however, my stormy weather Pizza Night with the kids may encounter a few more delays.

“We have drones in Reykjavik,” Bash added, “and snow shouldn’t be a problem.”

That’s good news for me, but what about the greater industry? What’s coming on the rotors of tomorrow’s aerial deliveries?

“Restaurants, grocery, and retail are next for drones,” Bash concluded. “It’s coming. It starts with hot food; the market is huge and educated for on-demand delivery. If I can get you three shirts from Banana Republic or your next iPhone in 15 minutes instead of leaving your house, that’s a game-changer.”

“It’s going to take a while, but that’s where we’re headed. And you don’t have to think about dinner!”