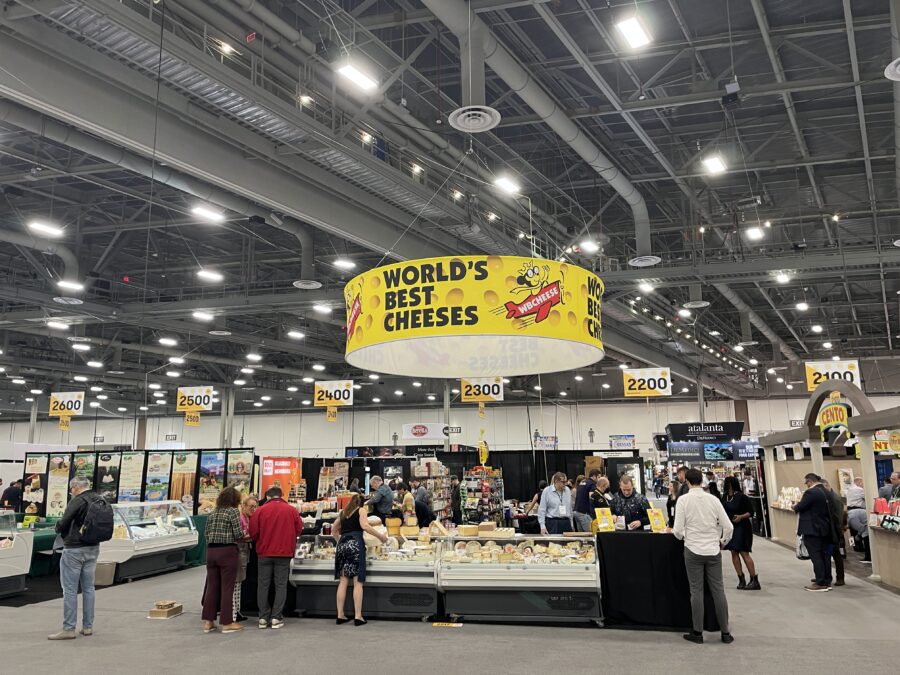 LAS VEGAS – For someone who’s never been to any of the Fancy Food shows – or any food trade convention, for that matter – overwhelming is too underwhelming a word.

In every direction, the flavors, foods, and trends of the globe are upon us. From neon Las Vegas, the Specialty Food Association’s biannual show is an all-senses assault of aromas, flavors, textures, salamis, umamis, pastramis, and more, from grass-fed beef to lab-grown veal, plant-based everything, Italian gelato, Australian cheese, Mexican tamales (as one half of The Food Institute’s spice-happy duad, Paola and I can’t get enough of anything to light our tongues aflame), Brazilian coffees, chocolate chocolate chocolate (Swiss; Belgian; Canadian; the list goes on), everyone browsing, munching, noshing, sipping, sampling, sloshing, drinking, thinking, and finally (mercifully) sitting as the day winds down, the lights dim, and the vendors pack up before another day hustling their products and services.

For my part, this midwestern boy was pleased to find an entire aisle devoted to Wisconsin cheese in the Deli Pavilion, and it stood kitty corner to European Imports, Inc., a massive contributor to world food in not only cheese but meats, seafood, pastry, and more. Walk a little further and you might spy buyers buying and sellers selling in the Key Buyer Lounge near the central SFA hub, where the latest in food tech demonstrations wow the crowd. Opposite the western entrance of the Las Vegas Convention Center lie the rows and aisles of the International Pavilion, where some of the most significant historical contributors to global food culture reside – Indonesia, Morocco, Thailand, Greece, European Union, India, Spain, Italy, India, France, Canada, and Japan – and that just scratches the surface of the net cultures here. Lot of back-slapping and embracing from the Italians, lot of spice (literal and otherwise) from the Spaniards, lot of exotic flavors and aromas from Morocco, India, and elsewhere around the globe. And that’s just from casually walking by.

It is, as my grandma used to say, really something to behold.

The Food Institute’s staff of journalists and media professionals held center stage for hours as we interviewed several vendors and showcased some of their products on a livestream simulcast on YouTube, LinkedIn, and Facebook. On Day 1, SFA guru, godfather, mentor, and friend Ron Tanner met some of the people (and tried some of the samples) from the New/Now/Next and Deli Pavilions, while I spent some time in the chocolate section of the Confectionary, Snacks & Sweets Pavilion, where I met several chocolatiers from around the U.S., including Abdallah Candies & Gifts, doncha know, from way up nort’ where da cold wind blows, not three miles from my house in Minnesnowta. Real good then.

To attempt to describe it all is a lesson in humility. If you’ve been here, you know – there’s something for everyone. Here are some foods and trends that really intrigued some of The Food Institute staff found on Day 1:

Brian Choi – Regenerative organic foods are really being embraced by the industry. Regenerative foods actually give back to the environment, quite literally – they’re not merely non-pesticide, non-GMO, but contribute nutrients and more to the soil, improve air quality, and help foster the natural environment.

Susan Choi – One item that really stuck out for me was Chocolate Storybook’s pickle cotton candy! Who has ever seen that kind of flavor in cotton candy before? It’s exploring beyond the traditional taste boundaries in candy. The story is interesting – a family-owned business, they developed that flavor for someone else and then later bought the item back so it could stay within their business. It later became a viral trend on TikTok!

Jordan Wiklund – For my part, I really enjoyed 40° Below’s functional frozen dot treats. This is the same family that created Dippin’ Dots, and now they offer three distinct lines – coffee, fruit, and mocktails – that include real caffeine, fruit and whey, and vegan/gluten-free/dairy-free varieties, respectively. I tried the NA margarita dots and the lime flavor burst immediately, indistinguishable from a cold margarita in hand but with the added benefit of less sugar and the same Dippin’ Dots texture many of us have loved since begging our parents for it at the zoo all those years ago.

#TrendWatch – No matter where we went, marshmallow and truffles were everywhere! Plant-based is huge, as well as ESG and sustainable foods, packaging, transparency, and increased fervor about reducing food waste.

Day 1 was a whirlwind; Day 2 went very well. Look for more On the Scene coverage soon, and tune in to The Food Institute on LinkedIn and Instagram to keep up with all the action. We’ll be posting more photo galleries, shorts, and reels, with some long-term follow-up to what we’ve discovered for tomorrow’s food industry. And we’ll see you this summer at the Fancy Food Show from New York City!