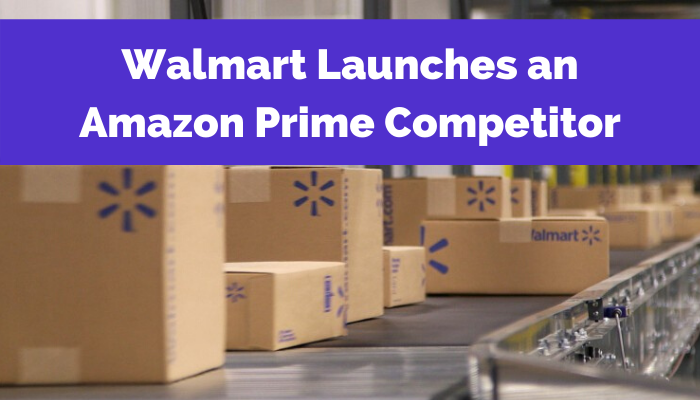 Walmart is launching a subscription service later this month.

Walmart+ will cost $98 a year and the company hopes it will eventually become an alternative to Amazon Prime, reported Recode (July 7). It will include perks like same-day delivery of groceries and general merchandise, discounts on fuel at Walmart gas stations, and early access to product deals.

Members will also be able to use a service called Scan & Go that allows them to check out in Walmart stores without waiting in line. A Walmart+ branded credit card will also be introduced at some point after the launch. Like Amazon Prime's own offering, Walmart also plans to add a video entertainment component to the program.

Walmart initially intended to unveil the service in March or April, but it was pushed back due to COVID-19. The pandemic's panic-buying helped Walmart boost sales to record highs earlier in the year, but its U.S. e-commerce presence is still only about an eighth of the size of Amazon's. A big reason for this is Amazon Prime. Amazon was responsible for 39% of all online sales, compared to Walmart's 5%, as of March 2020, according to eMarketer.

The service "makes a lot of sense," given Walmart's strategy of providing consumers with more ways to buy the products sold in stores, said Robert Ohmes, analyst at Bank of America Merrill Lynch, reported Fortune (July 8).

“This is the natural extension of what Walmart’s already been doing,” he said. “Walmart’s constantly trying to improve the level of omnichannel services of its stores.”

The company announced last year it was expanding its Delivery Unlimited service, a $98 grocery membership, to 1,400 stores in the fall. In April, it "accelerated the development" of Express Delivery, a two-hour delivery service for food and general merchandise. In May, Walmart combined its general merchandise app with its grocery app.

Walmart+ is the next evolution in giving customers more bang for their buck, Ohmes noted.

“There are a lot more people engaging Walmart digitally than they have before,” Ohmes said. “Walmart and Target are some of the biggest winners in a COVID environment, just looking at the significant growth rates.”

Still, Amazon Prime's dominance in retail could be hard to beat, according to a Zacks analyst. Although Amazon's service is costlier than Walmart+ at $119 annually, it connects and offers services from Amazon's other areas of business separate from grocery and general merchandise. Apart from same-day and next-day delivery of products, Prime gives customers access to Prime Video, exclusive shopping deals, and free access to Prime Reading's library of over 1,000 e-books and magazines.

Additionally, the pandemic boosted Amazon Prime's operations massively. The company hired as many as 175,000 people since the outbreak, increasing its capacity by over 60%—ultimately boosting the number of Prime memberships.

Subscription revenues climbed about 28% in first quarter 2020 from a year ago and subscription sales, which comprise Amazon Prime memberships, grew to $5.6 billion during the quarter.

A key reason behind the company's growing popularity is consistent services and additional perks, which could cause Walmart+ to take a while catching up. However, the share of people who indicated they have a positive impression of Amazon dropped from 74% in January before the pandemic to 58% in May in two similar, separate polls conducted by Survey Monkey with Fortune and Recode, respectively.

Four years before COVID, a market analysis report by Grand View Research predicted the global food robotics market would attain a value of approximately $3.4 million, with a CAGR of 13.1% by 2025. COVID has rapidly accelerated the growth of the market to meet consumer needs. Food robots, for instance, cooked, delivered, and served food in places that included...