Jun 12, 2020
How Food Companies are Successfully Marketing in 2020
By Victoria Campisi 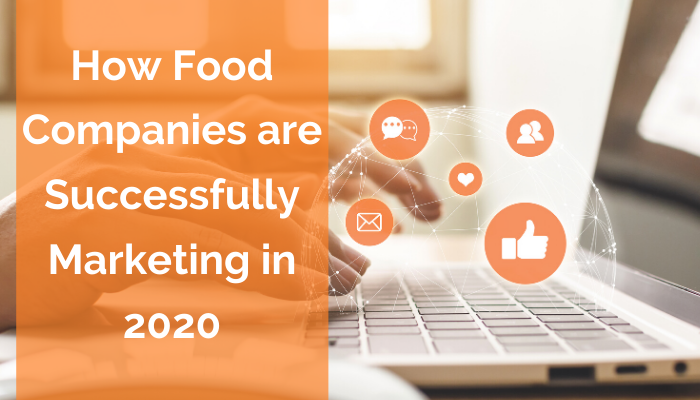 New, successful marketing techniques for food companies include the following:

The last several years, food companies have been taking new approaches to marketing, which have especially ramped up during the coronavirus pandemic.

Use of social media, non-traditional media outlets, and immersive marketing with consumers are all methods that are proving successful with brands.

Social media is an incredibly viable strategy for companies to market, with influencers and sponsored posts being especially effective ways of advertising in 2020.

Meal kit companies are known for partnering with influencers who promote their products on platforms such as YouTube or Instagram and provide a discount code for their viewers—encouraging the use of the service.

HelloFresh in particular has become very savvy in social media marketing. Hundreds of influencers across YouTube and Instagram, some with millions of followers, partnered with HelloFresh or joined the affiliate program, according to IDG Advertising. The brand itself boasts roughly 500,000 followers on its own Instagram account.

In YouTube partnerships, influencers will often integrate a HelloFresh brand deal into their content during a cooking segment displaying how simple it is to use the service, or even creating a whole video around it.

For instance, fitness and lifestyle vlogger Remi Cruz, who has about 3.9 million subscribers between two channels on YouTube, partnered with HelloFresh in 2019 in a video titled "Cooking with Remi is Back." The video, which garnered nearly 400,000 views since, shows Cruz cooking a HelloFresh meal and sharing her code that gives viewers $80 off their order.

This is only one example of many for HelloFresh, as well as other meal kit services such as Blue Apron and Home Chef. Partnering with influencers who consumers trust will give a brand credibility with an audience they may not have had otherwise.

As with many industries, the COVID-19 pandemic took its toll on social media marketing. However, since bottoming out in early April, publishers have seen video ad dollars rebound across Facebook, Snapchat, and YouTube, according to DigiDay.

Publishers noticed their platform video ad revenues begin to decline in mid-March after many advertisers stopped buying digital video ads or dialed back their budgets in light of the coronavirus outbreak. That pushed platform video ad prices down by at least 20% for many publishers in April.

Although stay-at-home orders eased in some states, publishers have seen viewership remain high—proving how people who watch, follow, or subscribe to certain content creators or brands are usually loyal.

With the rise of Netflix and other streaming services, watching TV in real time is becoming less and less popular. This can be problematic for companies who rely on television advertisements as their main form of marketing.

It is important for businesses to start investing in non-traditional marketing such as partnering with streaming services, as well as podcasts and other forms of media.

Kroger recently took note and partnered with Roku. Roku will integrate data from the country's largest supermarket chain into its new shopper data program, reported Adweek (June 8). The partnership is geared toward CPG marketers, who can now use data from Kroger's Precision Marketing arm for targeting and measurement purposes across Roku's roughly 40 million households.

Roku has been building out its ad offerings this year. It recently added 30 ad-supported channels to its free streaming service, and in May it unveiled a revamped ad platform, OneView. Advertisers should pay attention as many people use Roku to access their favorite streaming services and discover new ones.

"It's incredibly important for CPG advertisers as they'll continue to need to shift money out of linear and into streaming to find consumers that have cut the cord, but then there's also an additional ability for them to make those dollars work harder for them and to measure those dollars in a way they could not before with their linear buys," said Alison Levin, VP of ad sales and strategy at Roku.

Although a newer option in comparison to other media channels, podcasts are one of the most popular forms of media today, especially resonating with consumers who are on-the-go, or more recently, bored during quarantine.

Blue Apron was an early adopter of podcast sponsorships, according to Inside Radio. It was an initial sponsor of several popular podcasts, including public radio favorite "Serial," along with WBUR and The New York Times' "Modern Love" podcast. The company currently advertises on many other podcasts with a wide range of audiences.

Choosing podcasts with listeners who fit a brand's targeted audience is key for companies when deciding who to go with. Luckily, food is a topic that interests most people so there are plenty of options.

Another method is getting consumers directly involved in the marketing themselves. Several ways this can be achieved include campaigns for contests and giveaways, as well as virtual experiences.

One recent example of a brand using contest marketing is The Great American Takeout. Throughout the pandemic, the company has been encouraging people to order food to-go from a restaurant, while simultaneously promoting its brand.

The contest consists of consumers simply ordering takeout, posting a photo of it with specific hashtags, and tagging the brand on Twitter or Instagram. Prizes included giftcards ranging from $50 to $5,000.

Meanwhile, at the beginning of May, Campbell teamed up with Group Nine to create a campaign called The New Pantry, which promoted home-cooked meals. It included social media content about how meals at home can bring people together.

Created in partnership with Campbell's media agency, Spark Foundry, The New Pantry comprised of three phases including social, video, and written assets, as well as influencer-hosted virtual experiences. During phase three, there will be two branded virtual parties on Zoom featuring Popsugar personalities who will share tips for "shaking up" meals and more.

Chipotle also took advantage of the virtual party tactic during the pandemic. In March, the chain launched lunch parties dubbed Chipotle Together via Zoom, reported Thrillist. The parties featured various celebrities who connected with fans.

These types of events allow for brands to market while also giving fans something to be a part of—which has been particularly appealing during the pandemic.