The relative stock price performances of beverage companies this year tell a compelling story about the key beverage trends influencing today’s market. While most public beverage stocks closely followed the broad index (i.e., S&P 500 Index) from January to mid-March, there has been a sharp divergence of beverage company performance since the onset of COVID-19. The pandemic has clearly acted as an accelerant to consumer behavior changes, as we covered in our July edition of the Food Institute Report. Below is an explanation of stock performances year-to-date for a select group beverage companies. 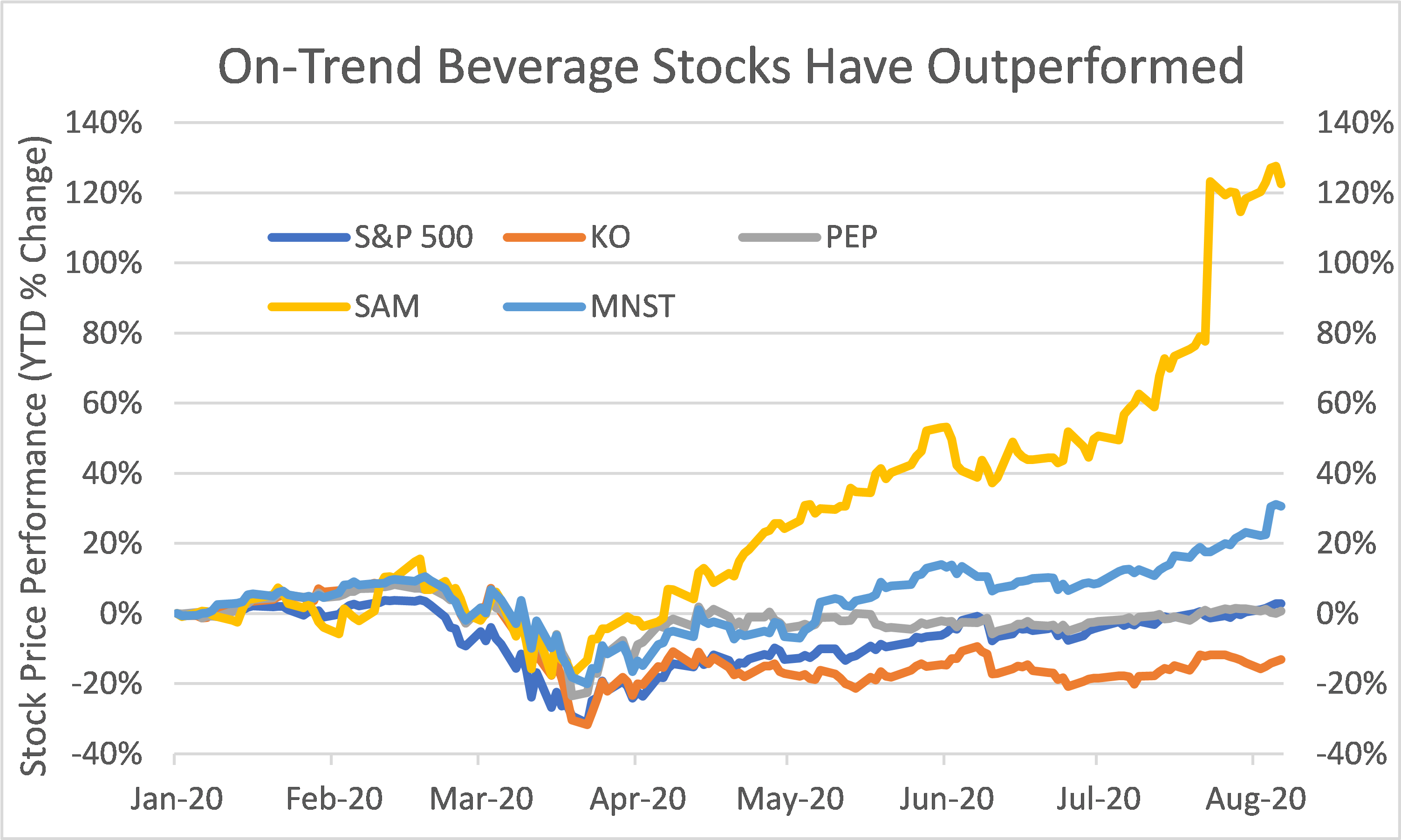 Coke has had somewhat of a disappointing year. Relative to the broader S&P 500 index and other beverage companies, Coke has underperformed by a wide margin. The combination of consumer shifts toward healthier “better for you” and less sugar alternatives remains a predominant theme impacting the company’s performance. COVID-19 also hit the company hard during the first two quarters of 2020 as volumes declined substantially due to the impact to the foodservice sector (e.g., restaurant closures). While Coke made some inroads into the functional beverage and energy drink categories with its partnership agreement with Monster and launch of Coke Energy, its success has been muted. Recently, the company also launched a hard seltzer beverage, Topo Chico Hard Seltzer, in Latin America.

Pepsi has performed better than Coca-Cola this year, as its business is much more diversified. Its foods and snacks business (i.e., Quaker and Frito-Lay) make up about 50% of the overall company’s sales, so while the beverage segments declined, the foods and snacks business experienced above average growth, thereby somewhat off-setting the beverage declines. However, even within its beverage segment, Pepsi’s partnership and acquisition of Rockstar Energy, and the recent distribution agreement of Bang Energy drinks with Vital Pharmaceuticals signal a dramatic shift towards the fast-growing energy drink market. Thus, it appears that Pepsi is better positioned for growth than its main competitor Coke.

Monster Beverage represents a pure play within the energy drink market. It is the number two energy drink manufacturer after Red Bull. When factoring in the growth trend in energy drinks (approximately 30% growth from 2013 to 2018) and the size of the overall market (approximately $14 billion), it supports the relative outperformance versus “conventional” beverage manufacturers like Coke and Pepsi. There is interest from management of the company to enter the hard seltzer and non-alcoholic seltzer market, and even possibly the CBD beverage market.

Boston Beer, maker of the popular Sam Adams brand of beer, was the top performer amongst our select beverage group. Even though domestic beer consumption declined in recent years, the company’s shares more than doubled year-to-date. What explains the unusual price performance? Its brands of hard seltzer and other low-calorie alcoholic beverages: Truly Hard Seltzer and Twisted Tea. Growth rates for the hard seltzer brand are expected to be greater than 100% this year and point to the outsized valuation of the company’s shares (i.e., forward PE ratio of 66).