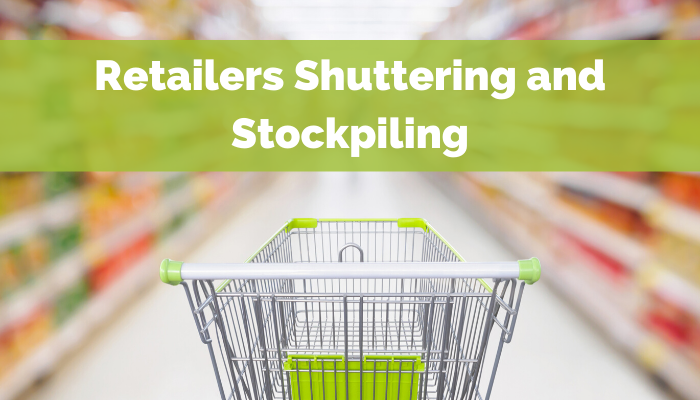 More than 47,000 chain stores across the U.S. temporarily shut their doors in 10 days, according to data compiled by Bloomberg.

Most stores pledged to remain closed to the public for at least two weeks, but could be closed for much longer. Many told customers that goods would be available online, but even some store websites were not immune including T.J. Maxx and Marshalls, which decided to cease their e-commerce businesses.

“In the space of a week, the retail landscape has changed from being fairly normalized to being absolutely disrupted beyond what we’ve ever seen before outside of the Second World War,” said Neil Saunders, managing director of GlobalData Retail.

An analyst at BMO Capital Markets predicts the shift could have a lasting impact on retail even after the outbreak is contained, as people might still lean towards social distancing and be fearful of crowds.

Meanwhile, supermarkets' plans to make supply chains more efficient have backfired amid the pandemic. Food sellers in the U.S. once kept months on inventory, but they recently drastically cut that to save on costs, reported The Wall Street Journal (March 23).

In the past two decades, producers and grocery stores, such as Kroger, went from keeping months of inventory on hand to only four to six weeks' supply. This month, being faced with a shopper rush, many sold out in days, exposing the downside of the push to hold less stock in warehouses.

Rollin Ford, a former Walmart Inc. executive, said major food sellers he spoke to this month told him they sold three months of supplies in 10 days. “Nobody keeps three months’ worth of anything anymore,” he said.

Retail sales of paper towels, black beans, and tuna rose roughly 150% in the week ended March 14 versus the year-earlier week, according to Nielsen. About 90% of shoppers said they experienced outages of some items, and a third said most items were out of stock, as indicated in a survey by Blue Yonder.

Manufactures, distributors, and retailers are now making as much food as they can, delivering it as fast as possible, as well as adding staff.

“We were all surprised. We did not come into the quarter with elevated levels of inventory in the U.S. or frankly anywhere,” said General Mills CEO Jeff Harmening.

General Mills is delivering truckloads of Cheerios, Gold Medal flour, and Annie's Homegrown pasta directly to stores' warehouses, instead of first sending products to its own warehouses to eliminate a link in the supply chain.

Retailers are overriding the algorithms that say how much of what products they should buy. Instead, retail executives are talking directly to manufacturers and making decisions in real time, according to Harmening.

Albertsons is sending more trucks to warehouses, carrying bigger loads, and hiring more drivers. It is also stocking more items that sell out quickly, rather than a wider variety.

Smart & Final is planning to bypass distribution centers when possible, bringing goods to stores directly from manufacturers. The company's purchasing managers are buying all the food they can find, according to Dave Hirz, CEO.

“Just-in-time purchasing has been thrown out the window,” he said.

Despite strong demand for basic foods like dairy products amid the coronavirus pandemic, the milk supply chain is experiencing disruptions that are preventing farmers from getting their products to market, reported St. Louis Post-Dispatch (April 3).

To make up for loss of restaurant sales, some restaurants are turning to retail operations. Restaurants are bundling in-demand consumer products with food and drinks to reach out to their communities, reported