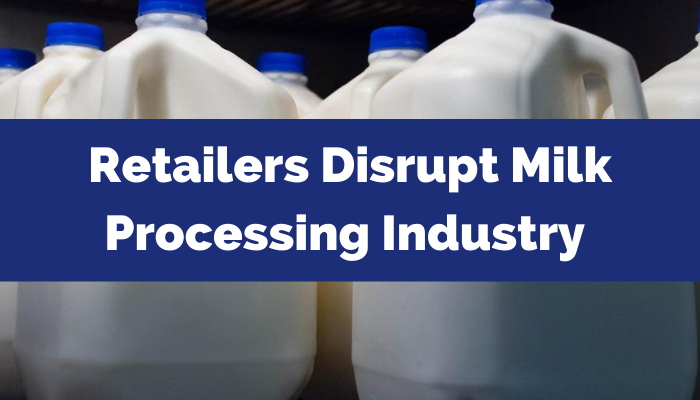 As retail looks to stay competitive during the pandemic, several grocers are bottling their own milk.

Walmart Inc., Kroger Co., and Albertsons Cos. expanded their offerings by building their own milk-bottling facilities, reported The Wall Street Journal (July 27).

For several years, consumer interest in milk was slowly fading as many consumers shifted to bottled water or juice, or dairy alternatives such as almond milk or oat milk. Although overall dairy demand, factoring in products such as yogurt, butter, and cheese, continues to grow, annual per capita U.S. milk consumption dropped about 40% over four decades.

However, pantry-stocking consumers pushed up milk sales at retail this spring for the first time in a decade. And milk still has appeal to supermarkets, as they know shoppers who come for a jug usually stay and buy a few other items.

“There are retailers who prefer to have really aggressively low prices on milk because it’s a great way to get people in the stores,” said Tony Sarsam, Borden Dairy Co.’s former CEO.

Milk also still regularly ranks among the top 10 purchases at Walmart stores, according to people familiar with the matter. Dean Foods used to be one of Walmart's biggest milk suppliers and the retail chain's executives regularly pushed Dean to lower milk costs. At one point, the price gap slowed sales of Dean's branded milk so much that Walmart dropped it from some stores.

By operating its own facility, Walmart is reducing costs and passing down lower prices to customers, according to a Walmart spokesperson Delia Garcia, who noted that the retailers technology and logistics system cuts delivery time to stores and extends milk's shelf life.

To keep their prices low, Kroger is also processing all the fresh milk it sells at a facility in Colorado while Albertsons has done the same and opened a processing plant in Pennsylvania.

Yet these moves are threatening some of the biggest operators in dairy. Dean Foods, which was the largest U.S. milk processor by sales up until last year, and Borden were both sold this year after filing for bankruptcy in November and January, respectively. In both cases, struggles included grocers' focus on inexpensive milk, according to executives.

Additionally, 3,300 dairy-cow herds disappeared following low milk prices in 2019, tensions with export customers, and processing-plant closures across the country, according to USDA.

One of AFBF's priorities is amending the Agricultural Marketing Agreement Act to give dairy farmers an opportunity to directly vote on Federal Milk Marketing Order (FMMO) issues. Currently, only dairy farmers who are independent and not members of cooperatives may cast individual ballots. Cooperatives may allow their members to vote independently, but then lose their ability to bloc-vote on behalf of their non-participating members.

AFBF supports allowing modified bloc-voting, which would permit co-op members to vote independently and confidentially, while allowing cooperatives to cast ballots for farmers who choose not to cast an individual ballot.

“Wild price swings during the COVID-19 pandemic have highlighted how important fair systems are to the well-being of America’s farmers and ranchers," said AFBF president Zippy Duvall. "By giving dairy farmers a seat at the table, we can begin addressing the challenges of the current FMMO system and work toward a more equitable compensation system for the hardworking men and women in the dairy industry.”

Other recommendations in the final report include expanding price discovery and examining alternative ways to price fluid milk.

Four years before COVID, a market analysis report by Grand View Research predicted the global food robotics market would attain a value of approximately $3.4 million, with a...