Speaking about private label foods during the Retail Trends Breakfast, Caroline Davidson, director, agency and channel partnership for SPINS, said “What we see that has actually higher percentage growth change – and consumers are willing to pay more for – are plant-based alternatives: the higher-protein, lower-sugar, like better-for-you dietary requirements” instead of commodity categories like bread, spices, and dairy.

Makers of plant-based meat alternatives at the Private Label Management Association’s recent event focused on health benefits, sustainability, and flavor. Ensemble Foods noted that its plant-based chicken alternatives are a source of protein, along with being vegan, Halal, and kosher certified.

Deli slices and seafood plant-based options were also plentiful at the Chicago-area show. Inspired by her great-grandfather’s history of operating New York delis, Jenny Goldfarb developed a 100% plant-based Unreal Corn’d Beef to satisfy her nostalgic cravings after she adopted a vegan lifestyle. Unreal Deli is billed as the only premium plant-based deli meat on the market with its protein-packed, kosher certified, GMO-free positioning. 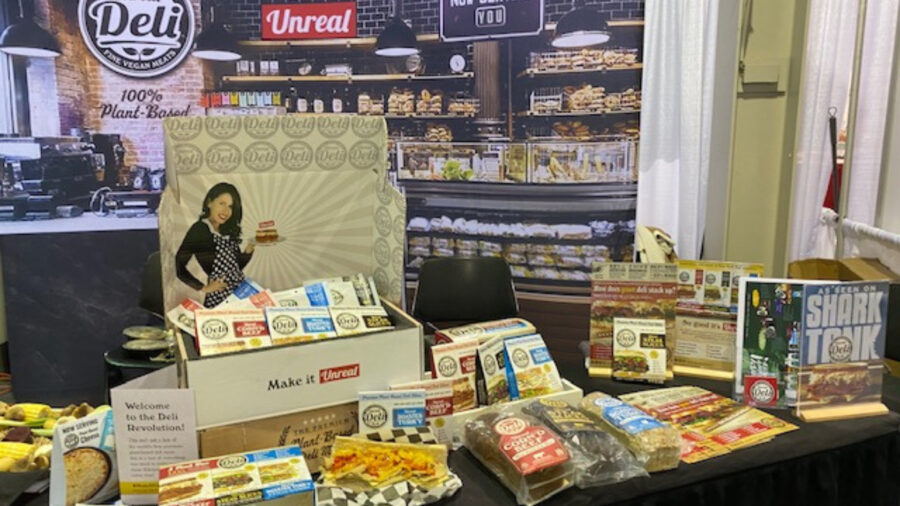 Plant-based alternatives to popular restaurant dishes included alternatives to Shawarma, a Middle Eastern dish typically made with thin slices of chicken or lamb that are stacked and roasted on a vertical rotisserie.

Oats had a big presence among the dairy alternatives at the show.

Oatbox promoted its oat milk made with Canadian oats. WayFare Foods showed its cream cheeses and sour cream made from butter beans and oats. Prana Organic featured its Granolove on the go Brownie Crunch Granola Cereal with Oat Beverage that is designed to be mixed with water. To appeal to a wide range of consumers, Culture Fresh Foods, Inc. sampled yogurts made with oat, coconut, or almond. In the cheese category,