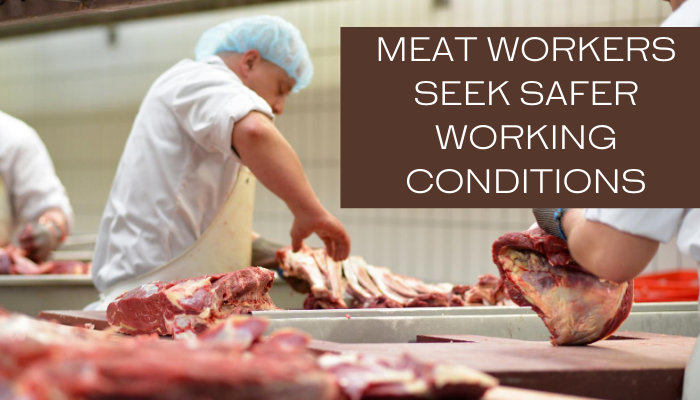 America’s meat and poultry facilities have been one of the hardest-hit sectors in the pandemic, reported Bloomberg (July 28).

Over 16,200 meat plant workers tested positive for the virus by the end of May and 86 died, according to a CDC report that collected data from more than 20 states.

The suit challenges USDA waivers, saying the agency ignored concerns that increased speeds would boost the risk of injury for workers. The United Food and Commercial Workers International Union and five of its local members said in the complaint that the USDA also violated administrative rules when it issued the waivers.

“As COVID-19 continues to infect thousands of meatpacking workers, it is stunning that USDA is further endangering these workers by allowing poultry companies to increase line speeds to dangerous new levels that increase the risk of injury and make social distancing next to impossible,” UFCW International president Marc Perrone said in an emailed statement. “This lawsuit will help to finally stop this dangerous corporate giveaway from the USDA.”

Poultry workers also suffer from high rates of on-the-job injuries, including carpal tunnel syndrome and nerve damage, a 2015 report from the CDC found. The concern is that faster line speeds will worsen these conditions.

Despite face shields and dividers, workers say they're forced to remain in poorly ventilated areas and crowd together, all while working with raw meat. A last minute bill to improve safety standards may go before the state legislature.

“We can’t wait any longer,” said State Sen. Tony Vargas of Omaha. “Every single month we wait is another group of individuals exposed to the virus, potentially spreading it in our communities.”

As of July 28, coronavirus cases related to food or meatpacking plants comprised about 19% of Nebraska’s total confirmed cases.

The companies that own many of the facilities in Nebraska, including JBS USA, Tyson Foods, Smithfield, and Cargill, say they tried to slow the spread of the virus by providing masks and other protective gear, enforcing temperature checks, and installing dividers to separate workers on the line.

However, in response to criticism from Democratic Senators Elizabeth Warren and Cory Booker on coronavirus outbreaks in slaughterhouses, Smithfield Foods argued that workers cannot be socially distant in all areas of its pork processing plants, reported Reuters (July 24).

“For better or worse, our plants are what they are,” Smithfield CEO Kenneth Sullivan said. “Four walls, engineered design, efficient use of space, etc. Spread out? Okay. Where?”

While glass barriers have been placed in areas where it is physically impossible to stand 6 ft. apart, the company balked at slowing processing line speeds to increase space between employees as slowdowns would back up hogs on farms, leading to animal culling and higher food prices.

The workers were employed by Maid-Rite Specialty Foods in the state, saying the company failed to provide PPE or social distancing on processing lines while offering bonuses to those who did not miss work. In the suit, the workers claim OSHA did not respond to complaints, but OSHA officials said they believe its existing regulations, along with the updated guidelines put out during the pandemic, are sufficient to keep workers safe.

The Maid-Rite workers also indicated that the company did not handle ill employees in a safe manner, failing to separate sick employees and to inform all of those who worked closely with them when there were infections.