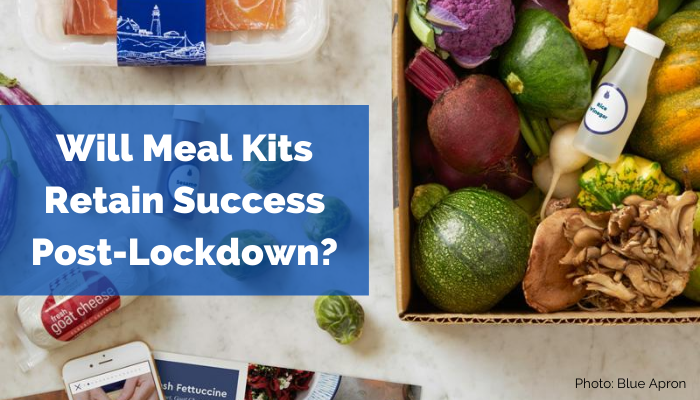 The meal kit industry experienced a boom during the COVID-19 pandemic—but will it last?

Stay-at-home initiatives helped Blue Apron climb out of its dip in profit, reported The New York Post (July 29). The meal kit company reported $1.1 million in profit in the second quarter, a strong rise from a loss of $7.7 million one year ago. Average revenue per customer for the company surged to $331 versus $265 a year ago, which is a level of spending Blue Apron has not seen in five years. This helped boost revenue 10% to $131 million, a return to growth that came "sooner than expected," according to CEO Linda Findley Kozlowski.

Rival meal kit company HelloFresh saw recent gains after it raised full-year guidance and said second-quarter results would beat market expectations partly because of the pandemic, reported MarketWatch (July 14). The company expects 2020 revenue to grow between 55% and 70% on a constant currency basis, compared with previous guidance for 40% to 55% growth.

Kroger-owned Home Chef also had a very strong year, according to president Brian Irwin. “We have had greater sales both from existing customers as well as new customers,” he said. “Customers continue to buy more meals per delivery and order more often.”

The company recently announced plans to partner with meat substitute maker Impossible Foods to place plant-based burgers in its kits—the first time Impossible Foods has shown up in the meal kit sector.

In the UK, meal kit company Gousto aims to hire 1,000 workers as it expands, reported The Financial Times (July 26). Gousto started making a profit this year and plans to expand its capacity over the next two years, including opening new manufacturing and delivery centers. CEO Timo Boldt said Gousto was already the biggest meal kit provider in the UK but had the potential to grow much bigger as people changed their eating habits.

However, as competition grows in the space and stay-at-home orders ease, the meal kit surge might come to an end, reported PYMTS.com (July 20).

Executives from Blue Apron said they expect to see losses next year, continuing the trend of fewer customers purchasing the subscription service as competition increases. While the company expects third-quarter revenue to jump 13% in the current quarter, it also expects to post a quarterly loss as high as $18 million.

Competition is also coming from restaurants that started offering their own meal kits. For example, TGI Fridays recently launched Butcher Shop Kits that are filled with raw meat and seafood as well as toppings and other items to recreate one of their meals, reported Delish (July 21). Several other chains began doing this earlier in the pandemic, including Shake Shack and California Pizza Kitchen.

It's clear the meal kit industry is doing well at the moment, but it is unclear whether this will last once the pandemic ends. Companies are questioning if meal kits will hold consumers' interest when they are able to dine out more often.

"There is no doubt meal kit companies have been boosted in recent months by shoppers' reluctance to visit the supermarket too often, as well as by locked-down consumers having more time to cook and not being able to visit restaurants," said GlobalData's Andy Coyne. "As lockdowns are eased and foodservice operators start to reopen, the question is whether meal kit businesses can make these gains stick."

He noted that the companies are hoping new customers enjoy their meal kit experience and will build it into their grocery habits once things normalize.

"Providers will face a battle holding the attention of a market that's no longer so captive, while they will also have to pay close attention to pricing in a world that will be experiencing economic hardship," he said. "They will have to balance this against the high marketing costs typically associated in building their customer base, and the big sustainability issue suppliers had to deal with before COVID-19 hit—excessive packaging—has not gone away during the lockdown period but simply become less of a priority. That will change."

However, Coyne added that if meal kit providers can get on top of these issues, they might find opportunities in a "new normal," a landscape in which people who are working from home more often or are still a little reluctant to dine out as regularly as they once did.

Four years before COVID, a market analysis report by Grand View Research predicted the global food robotics market would attain a value of approximately $3.4 million, with a CAGR of 13.1% by 2025. COVID has rapidly...