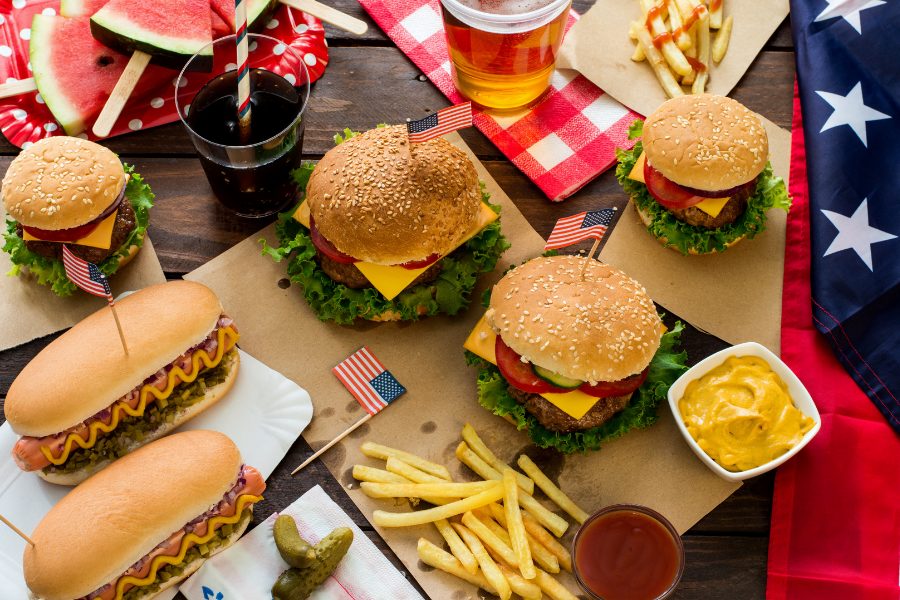 Two-thirds of Americans plan to return to normal Independence Day celebrations this weekend, according to Numerator.

So, as pandemic restrictions ease and Americans resume their Fourth of July traditions, The Food Institute takes a closer look at industry developments that may (or may not) affect your festivities.

Since mid-March — as global demand accelerated, supply-chain constraints continued, and grilling season started — wholesale beef prices have shot up more than 40 percent, with certain steak cuts skyrocketing more than 70 percent, according to the Department of Agriculture (New York Times, June 23). Wholesale chicken prices are up 56.45% from last year, with additional pricing support coming from the ongoing chicken sandwich wars.

At the same time, a typical summer cookout for ten people will cost U.S. consumers approximately $6 per person this year, down 16 cents (less than 1%) from last year, but 8% higher compared to 2019, according to an analysis by the American Farm Bureau Federation. Of the dozen items on this year’s AFBF’s summer cookout shopping list, seven saw prices decrease and five had increases.

A recent survey commissioned by the National Hot Dog and Sausage Council and The North American Meat Institute, showed that 73 percent of Americans believe that a cookout is not complete without hot dogs. The council also notes that Americans will enjoy 150 million hot dogs during the holiday, enough to stretch from Washington D.C. to L.A. more than five times.

Americans will spend more than $1.4 billion on beer and wine, over the Fourth of July weekend, according to WalletHub. With this in mind:

Pabst Blue Ribbon launched an Independence Day-themed 1776-pack, which lays claim to the biggest beer package ever. Only four of the packs were created and contain a whopping seventy-four cases of beer each.

Anheuser-Busch will give away $5 drink certificates in honor of Independence Day. The company first announced the giveaway in early June as part of President Biden’s “National Month of Action” to increase vaccination rates across the country.

Starting Friday and through Monday at 11:59 p.m. ET, adults 21 and older can go to MyCooler.com/beer and upload a picture of themselves at their favorite place to have a beer (such as a local bar or restaurant, backyard or baseball stadium). They will get an email with a digital gift card worth $5, the average retail price of an Anheuser-Busch product. They can use the card to claim a free beer through Monday.