Jun 22, 2020
Where is the Edible Insect Segment Headed?
By Valued Contributor 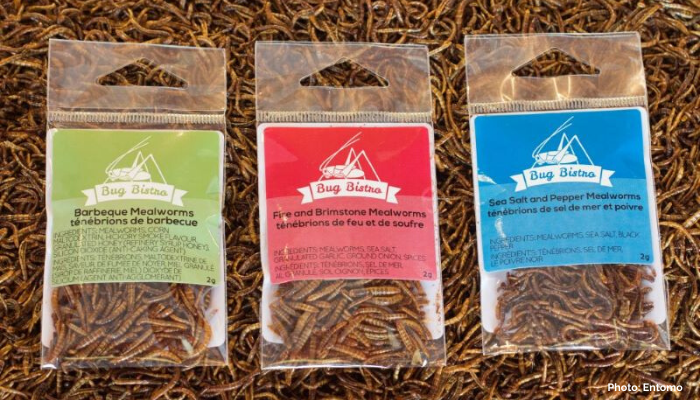 The COVID-19 pandemic posed numerous challenges to food sectors, especially meat product producers. As the health crisis continues to impact the supply of meat, it is also driving the demand for alternative protein substitutes like insect protein products.

The edible insect market is positioned to boom over the next couple of years. The global market value for this alternative protein, which surpassed $112 million in 2019, is projected to grow at a compound annual growth rate of over 47%, reaching $1.5 billion by 2026, as seen in an industry forecast from Global Market Insights, Inc., on Feb. 2020.

The increase in consumer demand for edible insects partly stems from environmental awareness. The UN FAO released a report in May 2013 about the future prospects of edible insects as both food and feed. Finding new ways of growing food is a necessity, given that the global population is predicted to hit 9 billion by 2050. This rise will require almost double the output from a food production system already strained by climate change, land scarcity, and other environmental factors, as detailed in the report.

Jarrod Goldin, DC, and his brothers Darren and Ryan launched Entomo Farms in 2014. The company, based in Norwood, Canada, was the “first farm to raise insects strictly for human consumption in North America,” so at its inception, the edible insect industry didn’t even exist in this continent, said Dr. Goldin. The conversation surrounding edible insect consumption initially focused on the environmental benefits of this sustainable alternative food source.

According to Valerie Stull, PhD, the director of the Mission to Improve Global Health Through Insects Project, insect farming is more sustainable than traditional livestock farming in a few different ways. Insects are more efficient at converting what they consume into body mass, so they require less feed than other kinds of livestock. Feed for insects can also come from a variety of sources, such as agricultural byproducts, food waste, and manure, that are not edible for humans or other livestock. These qualities help the environment because needing less feed results in clearing less land to grow it. And unlike cattle or swine, mealworms and crickets in particular do not emit methane, a greenhouse gas.

Entomo Farms plans to scale up its production as CPG brands continue to enter the edible insect market. The Canadian producer sells wholesale mealworms and crickets to companies making insect-based protein bars, chips, and other snack foods while also offering its own retail products, such as insect powders and seasoned insect snacks. In Dr. Goldin’s opinion, consumers of all ages and lifestyles seek out these products due to an increased awareness of the healthy and nutritional qualities that edible insects possess. Insects are high in protein, dietary fiber, and nutrients such as iron and zinc, and low in carbohydrates, said Dr. Stull.

Since Chirps’ humble beginnings as a project from three friends at Harvard University in 2013, it has flourished into a brand found at 1,500 stores nationwide and exported to Europe, Japan, and Australia. In 2017, Chirps became the first edible insect snack to be sold on Kroger shelves, a feat “definitely indicative of top-level perception of where this trend is headed,” said Camacho.

Investments have also been heating up the edible insect market. Last year, Maple Leaf Foods, based in Mississauga, Canada, and one of the “largest protein companies in the world and North America,” took a minority stake in Entomo Farms, said Dr. Goldin. But investors are interested in insects for more than just human food. There is a range of possible applications, such as pharmaceutical and nutraceutical products; agricultural and home fertilizers made from frass, or insect excrement; pet food; and feed for livestock like chicken, whose natural diets include insects.

Other companies, including Aspire Food Group in Austin, Texas, have been investing millions into automation for harvesting edible insects, which currently requires a lot of human labor, said Camacho. Automating this process would lower the wholesale cost and therefore, the price of edible insect-based products—making them a more attractive and affordable food option for consumers.

By Anna Kang, freelance writer/editor based in New York. Reach her at annaheekang@gmail.com

Grocery shopping has evolved from a Main Street event (where we go to our local market frequently to purchase food and goods) to an order most anything, from anywhere, at any time online. Online shopping, which started off slowly, was initially an underwhelming choice for consumers. As the internet grew along with smartphones,...