May 1, 2020
Delivery and Takeout Provide Relief to QSR
By Victoria Campisi 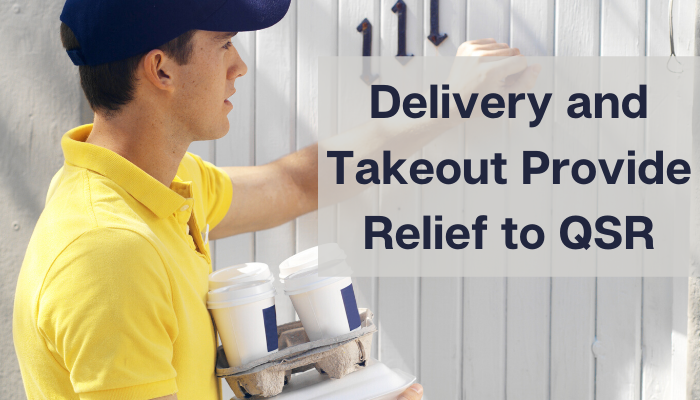 Same-store sales at Dine Brands' Applebee’s fell almost 11% in the first quarter and 15% at IHOP, while same-store sales at Brinker International-owned Chili’s dropped about 5% in the quarter ended March 25. “The physical distancing measures, shelter-in-place orders, and government mandates requiring restaurants to close dining rooms, while critical to flatten the curve, have made a significant impact on the operations of our business and that of the entire industry,” said Steve Joyce, Dine CEO.

However, Dine Brands' takeout and delivery sales grew almost 13% at U.S. Applebee’s and 16% at IHOP in the first quarter, and more than doubled so far in the second quarter. Brinker is reconfiguring takeout areas at its restaurants to handle higher volumes and is beginning to reopen dining rooms with a floor plan that allows for about 50% of its usual capacity. Sales from takeout and delivery at company Chili’s locations rose to $32.2 million for the week that ended April 22 from $22.2 million for the week that ended April 1.

For Restaurant Brands International, Popeyes saw an over 26% jump in first quarter same-store sales, but sales at Tim Hortons took a hit, reported Reuters (May 1). Sales at the company’s flagship Burger King operation were better, down 3.7%.

CEO Jose Cil said the online infrastructure that the company put in place over the past two years helped it adapt quickly, but the company also mentioned the April to June period would be harder hit.“We expect a more significant impact from COVID-19 on our full quarter results in Q2,” the company said.

Chicken demand from U.S. quick-service restaurants (QSR), such as Popeyes, bounced back to near where it was before the coronavirus outbreak, according to Pilgrim’s Pride Corp., reported Reuters (April 30). “The QSR business, it went through its trough,” Pilgrim’s Pride CEO Jayson Penn told analysts. “That business is now strengthening.”

Penn noted that the quick-service segment is holding up relatively well and is expected to drive a faster comparative recovery in demand versus full-service as the population gradually resumes more normal routines.

Additionally, Yum Brands reported that global same-store sales fell 7% in the first three months of the year as the pandemic closed thousands of its restaurants and weighed on Pizza Hut and KFC’s sales, reported CNBC (April 29). “Trends have improved significantly as we move through April,” said David Gibbs, CEO.

Taco Bell was the only brand to report positive same-store sales growth during the quarter. In mid-March, the chain began offering only drive-thru service, with takeout allowed if the location did not have a drive-thru lane.

For McDonald's, first quarter earnings fell 17%, reported CNBC (April 30). Sales trends are showing signs of improvement in some markets, like the U.S., but executives expect steeper global same-store sales declines in the second quarter than in March.

U.S. same-store sales fell 25% from mid-March through mid-April, but trends in McDonald’s home market are improving. The company estimates April same-store sales declines of 20% in the U.S as average check increases. “This is due to an increase in party size, as well as evolving consumer behavior, with daily routines interrupted and fewer transactions at the breakfast daypart,” said Chris Kempczinski, CEO.

The brand benefits from a modern estate, digital investments, and operational excellence as well as global scale that result in a sharing of best practices, according to Piper Sandler analysts. However, each market remains dynamic and is experiencing different trends, some are a proxy for the industry and others are not, the analysts noted, saying stores that were able to remain open with modified operations and have drive-thru functionality remain the best-positioned.

Food distributors are unfortunately expected to feel significant losses from the COVID-19 pandemic and containment efforts. According to Mark Allen, CEO of the International Foodservice Distributors Association, or IFDA, the industry is expected to lose $24 billion over the next three months. Nonetheless, food distributors must keep goods moving across America, maintain driver/technician health and safety measures, adapt to quickly...