Jun 22, 2020
China Cracks Down on Food Exports
By Victoria Campisi 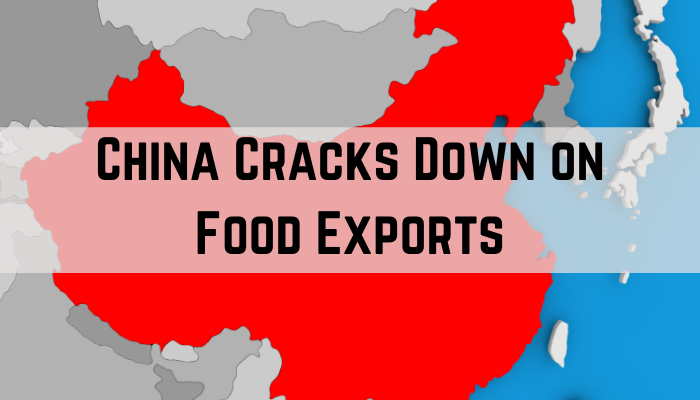 China's customs authority asked food exporters to the country to sign a declaration their produce is not contaminated by coronavirus, reported Reuters (June 19).

The declaration may be an effort by China to reduce additional testing it carried out on imported food over the last week and make exporters responsible for guaranteeing products safety, according to one meat importer who signed it who declined to be identified.

The French pork industry association Inaporc also received the notice, according to an official.

The declaration indicates the exporter is willing to comply with Chinese laws and guidance from the U.N. Food and Agriculture Organization and the World Health Organization to ensure food imported to China is not contaminated with the virus.

“In the event that a new case/suspected case of COVID-19 is detected in a food enterprise, or if there is a risk of contamination of food products exported to China, we are willing to take all necessary measures to eliminate food safety risks and protect consumer health,” it added.

Beijing began testing imported food after an outbreak in a wholesale food market last week, while in Tianjin, the primary port for Beijing, authorities are testing all containers of meat, according to importers. More than 30,000 samples of meat, seafood, vegetables, and fruit were tested from June 11 to 17 with all testing negative for the coronavirus, customs said on June 19.

“It’s very costly and time-consuming to test all products. They’re asking suppliers to sign this letter so they can go back to normal,” said the meat exporter.

“If any shipments are found to have COVID-19, they will be destroyed anyway, with or without the letter,” said another meat supplier who had not signed it.

“At Tyson, we’re confident our products are safe and we’re hopeful consultations between the U.S. and Chinese governments will resolve this matter," wrote spokesman Gary Mickelson in an email to The Associated Press. “Our top priority is the health and safety of our team members, and we work closely with USDA's Food Safety and Inspection Service to ensure that we produce all of our food in full compliance with government safety requirements."

If China continues to suspend shipments based on coronavirus cases reported at processing facilities, it could also threaten to undermine promised agricultural purchases as part of the Washington-Beijing trade deal, reported Yahoo Finance (June 22).

Mickelson noted that all global and U.S. health organizations, in addition to FDA, agree there is no evidence to support transmission of COVID-19 associated with food.

The company found 481 positive cases among 3,748 tested employees, with 95% of those testing positive being asymptomatic.

In November, China lifted a five-year ban on U.S. poultry. The country previously blocked U.S. poultry imported a month after an outbreak of avian influenza in Dec. 2014.

The company conducted nucleic acid tests on all employees at the facility on June 16 and quarantined 480 employees on June 20, even though they all tested negative for the virus, according to Fan Zhimin, one if its officials.

PepsiCo China later said in a WeChat post that none of its beverage plants in the country have reported any cases of the virus.

Grocery shopping has evolved from a Main Street event (where we go to our local market frequently to purchase food and goods) to an order most anything, from anywhere, at any time online. Online shopping, which started off slowly, was initially an underwhelming choice for consumers. As the...