Nothing is more American than baseball, apple pie, and the annual Feburary “big game”(you know what I’m talking about, I have legal constraints). But now you can add one more thing onto the list, chicken wings.

The chicken wing may seem to be a ubiquitous part of American cuisine, however it wasn’t always this way. Once upon a time chicken wings were considered a “meat scrap,” only considered fit for being grounded down into pulp for stock and as a food additive. It was in 1964 that the concept of an “buffalo” chicken wing came into being.

Since then chicken wings have radically transformed themselves from neglected meat filler to trendy bar hors d’oeurve to an American national dish. Much like there are restaurant chains dedicated to the specialized selling of certains food, e.g. Burger King for hamburgers or Nathan’s Famous for hot dogs, restaurants specifically dedicated to the creation of chicken wings have ascended to become major players in the restaurant industry. Franchises like Buffalo Wild Wings, Zaxbys and Wingstop have challenged and, in some ways, have surpassed traditional chicken restaurants. In 2018, Buffalo Wild Wings surpassed Chick-fil-A and KFC in gross revenue.

So why have chicken wings become so popular? Likely because of the versatility of the food itself. Chicken wings can be eaten as a quick snack on the go, an appetizer, or as a full meal. Unlike other foods, chicken wings have a wide variety of sauces and rubs that can be used to give each wing its own unique flavor. Restaurants have begun to create a wider variety of sauces in addition to the traditional buffalo sauce drawing from various ethnic cuisines. In a sense, the chicken wing has become the canvas for sauce makers experimentation. Buffalo Wild Wings made headlines recently when it announced a new sauce listing Mountain-Dew as an ingredient. Such culinary artistic expression is well appreciated by the public.

Chicken wings have unmistakably become part of the wider American culture just like the “big football game” that happened this weekend. These two parts of American culture seem to go together, they are complements. The National Chicken Council estimates that Americans consumed about 1.4 billion wings during the 2019 “big game” weekend. That’s four wings for every man, woman and child in the U.S. and enough wings to circle the Earth three times. 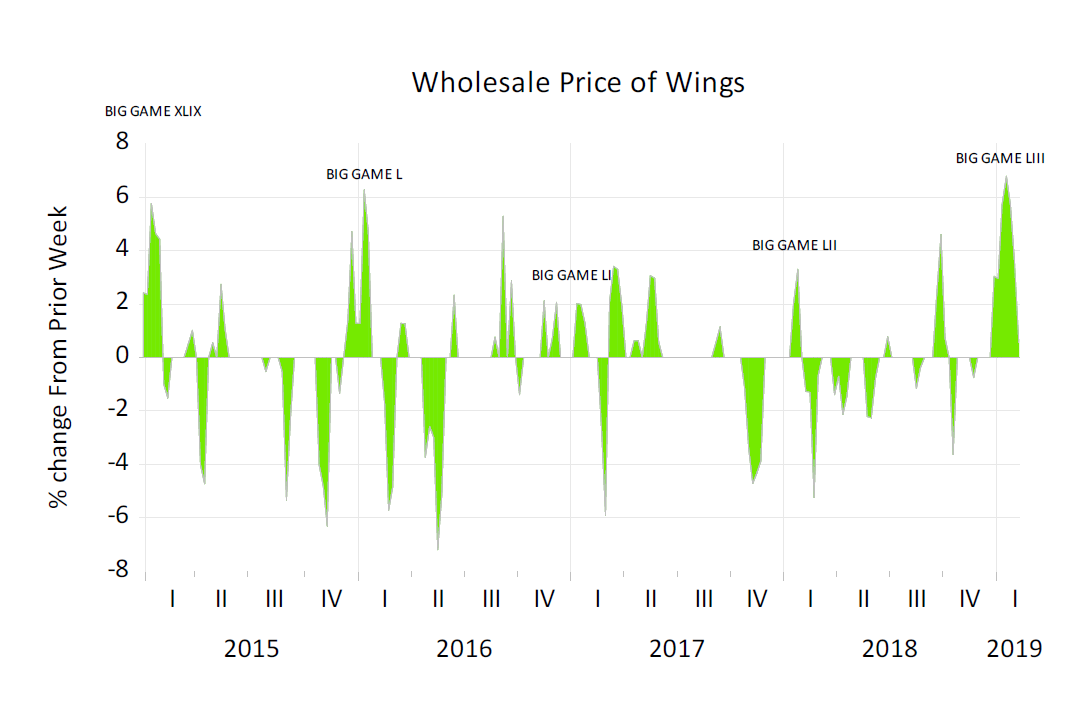 Chicken wings are already prone to large fluctuations in prices because of erratic supply and demand (a chicken only has two wings, at least until we perfect genetic enigeering) but the “big game” takes wing prices to another level. At the current price, chicken wing wholesalers sold an estimated $23.9 billion worth of wings this “big game” Sunday, retailers will make even more.