Fears of African swine flu (ASF) have begun to abate in the live lean hog futures market. Hog futures that were trading near $.70 per-lb. plummeted to about the $.50 mark.

So why did this happen, why did pork prices experience a dramatic price decline amidst the ASF epidemic and tariff pressures? The answer is that both of these adverse factors were vastly over-blown and hog futures in the past month have been greatly overvalued. Fears of a potential larger outbreak initially stoked an unusual third quarter rally in the futures market. From the end of August to the second week of October, hog futures prices had risen nearly 40%.

Hog futures prices have since fallen markedly, returning to pre-outbreak levels. Playing a role in the steep decline in prices is the seasonal nature of hog futures. As displayed in the chart below, hog prices tend to be higher in the spring and summer months when grilling season is at its peak and lower in the fall because sow fertility and conception appears to be best in winter and early spring, which then translates into a larger calf crop coming to market during the May – Aug period and larger slaughter in the final quarter of the year.  The fall in prices shows a return to this seasonal pattern. 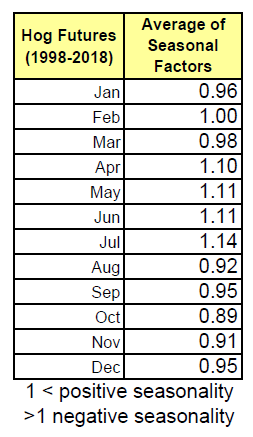 China, the world’s top pork producer, has culled 200,000 pigs so far following outbreaks of highly contagious African swine fever in the country, a Chinese animal health official said on Friday Oct.19 reported China Daily. However, these 200,000 pigs represent only a miniscule portion of China’s hog supply which totals nearly 700 million annually. Since the first case of ASF in early August, Chinese authorities have culled over 200,000 hogs however this represents less than one-tenth of one percent of Chinese hog production from August to October. While right now this impact of ASF on China seems negligible, the situation may change in the future.

Additionally there has been discussion regarding recent U.S./China tariffs and how they may affect supply and prices. In retaliation to U.S. tariffs China imposed a 62% tariff on U.S. pork imports in July. These tariffs have had little effect on world hog prices or domestic Chinese prices as China is both the largest producer and consumer of pork giving them partial monopoly and monopsony power in the hog industry.  Despite it’s advantage in domestic pork production, China still needs to import a large amount of its pork from abroad. In 2017, 13% of U.S. pork exports when to China; China has begun to fill this import gap by up domestic production and increasing imports from the E.U. and Brazil.