Feb 26, 2015
Use Star Power to Improve the Image of Fruits and Veggies
By Chris Campbell 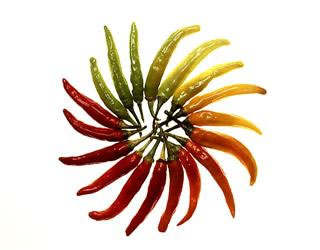 The 2015 Dietary Guidelines for Americans has some very specific verbiage about what we eat: "On average, current dietary patterns are too low in vegetables, fruit, whole grains, and low-fat dairy, and too high in refined grains, saturated fat, added sugars, and sodium." [emphasis mine]

It's no secret that Americans consume too few fruits and vegetables in favor of meats and grains. And even as the evidence piles up that Americans need to eat more produce, one fact rises to the top: produce farmers and distributors just can't compete with multi-million dollar advertising budgets. That may be changing, however, as a number of movements are pushing healthy eating, and fruits and vegetables specifically, into Hollywood.

First Lady Michelle Obama has made healthy-eating the keynote cause of her time in the oval office with her Let's Move! campagin that launched in 2010. The movement focuses on childhood obesity by instilling a need for exercise and healthy eating in children, and includes MyPlate, a tool that helps families put together healthy meals. Built from information the 2010 version of Dietary Guidelines, MyPlate suggests that half of any meal should consist of fruits and vegetables.

Some may argue that the First Lady should hold enough star power to provide momentum for a movement, but in 2013, Mrs. Obama partnered with Sesame Street for the Eat Brighter! campaign. About 50 retail chains and over 40 suppliers are currently participating in the program. The Sesame Street characters have been added to marketing materials for appropriate produce packaging to help draw children towards them, but that's not all: the First Lady recently appeared on Billy on the Street with Big Bird to help promote the cause via millennial comedy site Funny or Die.

The movement will be moving even further with the "FNV" push, created by Partnership for a Better America in conjunction with the Let's Move! campaign. FNV (stylized as a trendier way to state fruits and vegetables) will feature a wide variety of stars and athletes to spread the message: Americans need more fruits and vegetables in their diets. The materials include testimonials from actress Jessica Alba, Golden State Warriors guard and NBA star Steph Curry, New York Giants wide receiver Victor Cruz and Carolina Panthers quarterback Cam Newton, among others. The clips will begin circulating around social media sites like twitter, and will move into Fresno, California, and Hampton Roads, Virginia with TV and print ads in the coming months.

Still, some may wonder how these ads will compete with soft drinks, major food producers and snack companies. Well, the company that produced the videos is Victors & Spoils, who list Coca-Cola and General Mills among their clients. That levels the playing field a bit more in the ongoing battle to improve produce marketability.