May 12, 2020
Dine-In Business Continues to Reopen with Precautions
By Victoria Campisi 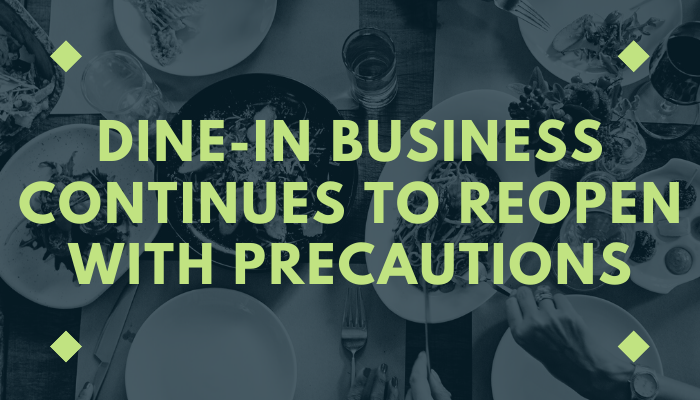 Although restaurant traffic declined 22% in March when compared to the prior year, digital restaurant orders increased 63% and delivery by 67%, according to The NPD Group. Visits to quick-service restaurants declined 3% during the month, but family or larger party size visits drove dollar sales up 2% and the average eater check increased by 5%.

"Our March results only show a portion of the significant impact the COVID-19 pandemic has had on the U.S. restaurant industry," said David Portalatin, NPD food industry advisor and author of Eating Patterns in America. "Although it's fact that a larger portion of food and beverage consumption has shifted to in-home, it's clear that consumers are not willing to give up on the convenience and experience a restaurant meal brings to them and their families regardless of the barriers."

And now these consumers can actually start enjoying dining in their local restaurants as lockdown restrictions are lifted and more restaurants are allowed to reopen by following guidance from local authorities.

Restaurant Brands International revealed it will begin reopening its dining rooms. In addition to mandating masks and gloves for employees, the company installed acylic shields and contactless service at most restaurants; is using tabletop signage to indicate which tables are open and which ones are reserved to help maintain safe distances; and it will move beverages, extra condiments, and trays behind the counter.

The Burger King, Tim Hortons, and Popeye's parent will also be sanitizing tables and chairs after each use and will have hand sanitizer available in the dining room for guests.

Additionally, Popeyes will move ahead with the opening of its first outlet in China and plans to set up "a few more" by the end of the year in several Chinese cities, reported Reuters (May 12). The company plans to expand gradually into cities near Shangai rather than open throughout the country at the same time. Popeye’s opening comes after the number of new coronavirus cases dropped sharply in China, allowing businesses to reopen.

Meanwhile, Rhode Island will allow restaurants to offer limited outdoor dining starting May 18, according to Gov. Gina Raimondo, reported MassLive.com (May 12). The state's rules will allow dining by reservation only; limit party sizes to five; limit total tables to 20; and require tables to be spaced at least 8 ft. apart or separated by barriers. State officials will recommend that restaurants use disposable or digital menus as well as single-use condiments and utensils.

The restaurants will also be required to screen customers for the virus and take down their contact information for the state’s contact tracing efforts. The intensity of the screening will be left to restaurants but could include warning signs, having a server ask customers if they’re feeling sick, or even taking their temperatures, Raimondo said.

In addition, restaurants will have to sanitize tables and chairs after every customer, and they won’t be allowed to offer valet parking, the governor added.

Futhermore, Simon Property Group plans to have roughly 50% of malls and outlet centers reopened within the next week, reported CNBC (May 11). Some of the measures it has put in place include limiting opening hours, reducing capacity, stripping some chairs from food courts, and handing out masks to visitors who ask for them.

As of May 11, the company said it reopened 77 of its properties in the U.S. where local lockdown restrictions have been eased. CEO David Simon said the company is “encouraged by the consumer response thus far.”

Food distributors are unfortunately expected to feel significant losses from the COVID-19 pandemic and containment efforts. According to Mark Allen, CEO of the International Foodservice Distributors Association, or IFDA, the industry is expected to lose $24 billion over the next three...