Jun 1, 2020
Larger Orders Rise, But Many Chains Still at Risk
By Victoria Campisi 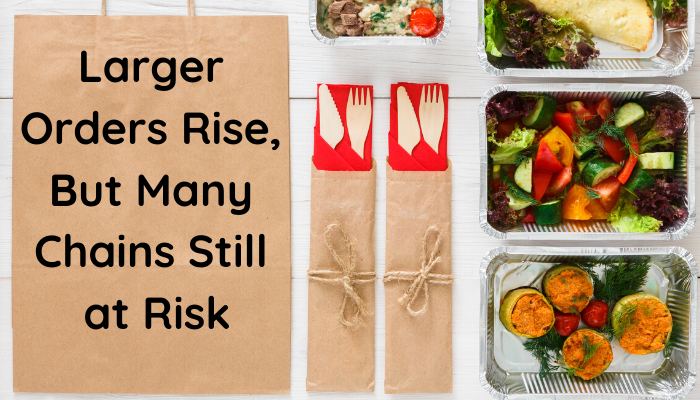 Similar to what is happening in supermarkets and other retailers, spending per purchase is up as people limit visits to stores and buy in bulk online. McDonald's, Wendy's, Grubhub, and Papa Johns all reported a rise in average order sizes. Spending per purchase in April rose 18% at fast food restaurants in the U.S., while rising 15% at fast-casual chains, such as Chipotle, according to Black Box Intelligence.

Bigger orders have been a bright spot for restaurants and many are capitalizing on the demand for leftovers with new marketing, sales tactics, or menu items. For example, Dunkin' restaurant owners placed boxes of doughnuts in drive-thru windows to tempt customers to order.

“It’s enough food to feed your family one night and have something for the following day,” said Yum’s CEO David Gibbs. Gibbs also noted Yum's restaurants in Asia continued to fill large orders even as the pandemic eased in the region and he expects the trend to extend to the U.S.

However, nearly-two thirds of publicly traded restaurants are still at risk of bankruptcy, according to a study from consulting firm Aaron Allen & Associates, reported Bloomberg (May 29).

“It’s really the full-service model that’s in the biggest danger,” principal Aaron Allen said. “Some of those that are in casual dining—a lot of those had already been bleeding cash, bleeding locations.”

Bloomin' Brands said it's tightly managing expenses and fortified its finances with a recent bond offering that gave the company $470 million in liquidity. Its dining rooms are starting to reopen and sales at its biggest brand, Outback Steakhouse, are improving, according to CFO Chris Meyer.

“Bloomin’ Brands is among the best positioned in casual-dining to weather this environment,” he said. “We believe we’re going to emerge from this pandemic a stronger company.”

Allen’s analysis found 65% in what it calls the "distress zone," which account for about 73,000 individual restaurant locations in the U.S. and $85 billion in annual sales. A further 22% of companies are in the "gray zone," with lower potential for default but which are still not entirely safe.

In particular, casual dining is being hit hard as consumers are opting for drive-thru and takeout. Carryout was the biggest traffic driver in March at 37%, according to NPD Group. While the industry as a whole saw a 22% decline in the month, drive-thru only saw a 2% drop.

“There’s some serious risk out there with a lot of these companies,” said Rob Hunziker of brokerage Advanced Restaurant Sales. The restaurants most in trouble are “those focused on inside dining.”

To make up for lost business in the meantime, many restaurants are offering cook-at-home meal kits to offer less-expensive menu options for customers, reported The Wall Street Journal (May 29). The kits also allow restaurants to generate sales without bringing their entire kitchen staff off furlough.

Many restaurants plan to formalize their meal kits as a continuing offering, while others, like Denny's, are shifting to more popular precooked and customizable family pack. "The Meal Kits drove short-term sales and provided an easy alternative to grocery shopping,” said John Dillon, EVP and chief brand officer for Denny's.