Jun 17, 2020
Can Independent Restaurants Be Saved?
By Victoria Campisi 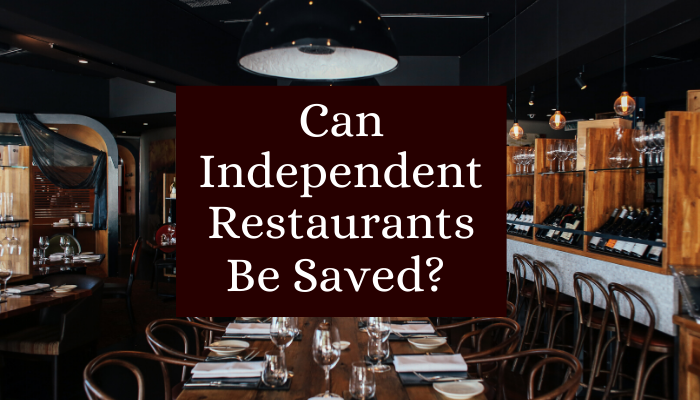 Without federal aid, 85% of independent restaurants could permanently close, according to a report commissioned by the Independent Restaurant Coalition (IRC), reported Forbes (June 16).

The report found that independent restaurants' revenues fell by more than 70% year-over-year during the last two weeks of March as public health officials and state leaders mandated a halt of on-premise service. This triggered the loss of 5.9 million total restaurant jobs.

Privately owned restaurants with less than 20 establishments encompass 76% of the industry and directly employ 11 million people across the U.S. Independent restaurants also indirectly support five million jobs at small farms, fisheries, vineyards, distilleries, and other mom-and-pop businesses. Many independent restaurants are completely responsible for the existence of these kinds of purveyors.

For example, Sacramento Sprouting Co. grows microgreens at a scale too small for supermarkets and sells more than 90% of its produce to local restaurants, with the remainder sold at farmers’ markets. As independent restaurants across the country shutter or operate in reduced capacities, these types of ecosystems are also on the verge of collapse, the report noted.

Prior to the pandemic, the restaurant industry had experienced years of growth and expanded employment, but the coronavirus dramatically reversed this trend very quickly, forcing restaurants to close on short notice and leading to the decimation of millions of jobs.

As states begin reopening and allowing restaurants to welcomine back a limited number of patrons for outdoor service and reduced capacity indoor dining, owners are calling on Congress to “take urgent new actions” to ensure that spots are able to reopen and “reignite” the economy.

Most restaurants trying to reopen face overdue bills and high costs of restarting business, reported The Wall Street Journal (June 16). For many, reopening has turned out to be harder than closing because it is nearly impossible to predict revenues amid social distancing while fixed costs remain the same.

In addition, a lot of restaurants haven't paid for food bought before the shutdown, and some suppliers won't deliver new food on credit unless some of the old bills are paid.

The IRC is proposing a $120 billion Restaurant Stabilization Fund that would help save the industry and "generate at least $248 billion in economic returns."

"Without the Stabilization Fund, hundreds of thousands of independent restaurants will likely close to the lasting detriment of local communities, small supply chain businesses, as well as the broader U.S. economy," the report stated.

The $120 billion fund would enable restaurateurs to rehire employees and cover fixed costs such as rent and utilities even as revenues continue to suffer, according to the group. The money would also provide businesses that need to reconfigure their dining areas with funds for partitions, digital thermostats, and improved ventilation systems so operators can comply with prolonged social distancing protocols.

IRC is asking consumers to support the effort by cosigning its letter to members of Congress and by posting on social media. It is also accepting donations on its website.

According to recent data from the Plant Based Food Association (PBFA), U.S. retail sales of plant-based foods outpaced total food sales during the pandemic by a considerable margin. Peak panic buying in mid-March saw plant-based food sales up 90% compared to the previous year. This trend continued for the following four weeks, with total...