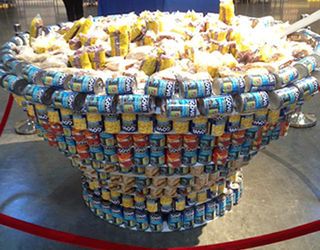 On Wednesday, Goya Foods President and Executive Vice President Bob and Peter Unanue invited coworkers, friends, family and the press to attend the grand opening celebration of their new Jersey City, N.J. facility. The new 900,000-sq. ft. location is part warehouse and part global headquarters that utilizes solar energy, skylights and climate control to reduce their carbon footprint. The facility also includes research and development kitchens, a large cafeteria for its workforce and a fitness center, as well. The new location is no more than a mile away from their previous Secaucus plant that will be rennovated into a packing facility for rice products.

After a brief reception with catered food and drinks made from their products, the presentation began with a retrospective video highlighting the growth of the company from the inception of the business by the Unanue brothers' grandparents to the present day. Certain themes rang throughout the presentation, but the most powerful was family. Rafael Toro, Director of Public Relations for Goya and M.C. for the event, came back to the theme many times, formally inviting all in attendance to join in La Gran Familia Goya: The Big Goya Family.

The company stressed community as a major reason for staying in New Jersey. Peter Unanue spoke first, and professed a litany of thanks to local and state officials, workers, contractors and more who helped make the Jersey City location a reality. His brother, Bob, spoke next, stressing again the importance of family and community. It was evident in almost every aspect of the day: a local high school marching band performed, and the National Anthem was sung by a Jersey City high school junior. Goya even pledged to donate 25 thousand pounds of food to five local food banks during the event.

New Jersey Governor Chris Christie thanked Goya for keeping jobs in New Jersey, echoing the importance of community. He also praised the company for how it represents New Jersey to rest of the country. Jersey City mayor Steven Fulop followed the governor and stated that Jersey City was the perfect home for the largest Hispanic food company in the nation. The event concluded with a packed staged surrounding Bob Unanue as he cut a large, white ribbon, followed by confetti and fireworks.