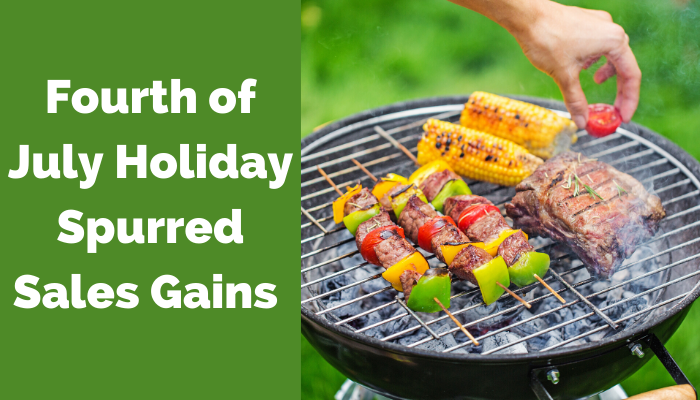 Frozen and shelf-stable fruits and vegetables did continue to see double-digit gains, with particular strength for frozen, at +24.4%. Year-to-date, fresh produce sales are up 10.6% over the same time period in 2019. Frozen fruit and vegetables increased the most, up 28.0% year-to-date.

“Independence Day is always a big holiday for fresh produce so this is not an easy bar to beat,” said Joe Watson, VP of membership and engagement for PMA. “Despite all that has changed amid the pandemic, much is the same as well. Cherries, melons, corn, and more all lived up to their holiday strength reputations and helped drive the significant boost over last year’s numbers."

Fresh produce generated $1.54 billion in sales the week ending July 5, an additional $129 in fresh produce sales. Vegetables were up 13.9% from the prior year and had an 8.2 percentage point lead over fruit—which gained 5.2% over last year.

“We are back!” said Watson. “When consumers were in their stock-up mindset early on in the pandemic, the share of fresh produce versus the total fell as low as 70% from our normal position of about 84%. Slowly but surely fresh produce recovered its position and the holiday week brought the share back up to 84% for the first time since early March.

The holiday also provided an opportunity for meat. Meat prices were still elevated and several states rolled back their relaxation of pandemic social distancing measures. The 2020 holiday resulted in a 17.9% increase in dollar sales versus year ago. This was the 17th week of double-digit gains since the onset of the pandemic.

Unit purchases in fresh meat increased by 8.4 million, or 5.2%, over the Fourth of July week versus last year, while volume increased 4.1%. So far during the pandemic, starting March 15 through July 5, dollar sales are up 36.4% and volume sales increased 23.0% versus the same period last year.

Additionally, hot dog sales were up 5.6% over the same week last year. During the last week of June, volume growth was off -19.4% versus a year ago and the week of Independence Day volume sales decreased by 11.2% versus the 2019 holiday results.

For plant-based meat alternatives, during the final full week of June and Independence Day week, sales gains were in line with the gains observed pre-pandemic. Dollars were up 46% and volume 38%.

Meanwhile, rising food prices helped drive the consumer price index up 0.6%, the most in eight years, after months of decline, according to the U.S. Labor Department, reported CNBC (July 14).

The core consumer price index dropped along with the rest of the economy over the three months of the pandemic. Some economists feared that government stimulus could increase inflation, but it mostly remained flat.