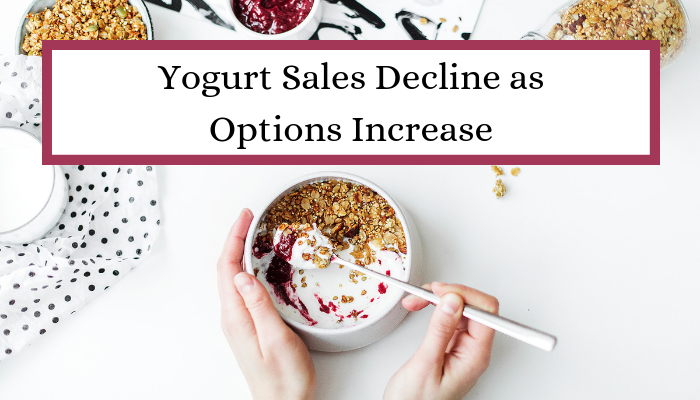 As more yogurt varieties hit the shelves, consumers are facing confusion and sales are slipping.

U.S. yogurt sales fell in each of the past two years after a decade of growth, according to Euromonitor International. Many decades-old brands of packaged food companies are losing market share to more health-oriented startups and store-brand alternatives, reported The Wall Street Journal (April 9).

Chobani LLC played a big part in making yogurt one of the most "fashionable foods" of the past decade. Its natural and healthy aesthetic became a model for other big food companies, spurring them to include fewer artificial additives and more natural ingredients. However, Peter McGuinness, Chobani's chief marketing officer, said yogurt makers undermined their own sales by introducing too many new flavors and styles. "It's self-inflicted," he said.

The average U.S. supermarket carries 306 different yogurt varieties, according to Acosta, up 4% since 2015. Overall yogurt sales fell 6% by volume in the year through February, Nielsen data shows. Greek yogurt, which kick-started the category's growth, witnessed a drop of 11%. The influx of options appears to be giving consumers "yogurt fatigue."

In addition, food companies say retailers hurt yogurt sales by cutting prices and shelf space. Some grocers are promoting lower-priced yogurts which are sold under their own brands.

Meanwhile, some varieties of yogurt are showing promise such as Icelandic styles, known as skyr, as well as nondairy versions made out of coconut, almonds and other plants. In the 12 months ended in February, the Icelandic style jumped 24% in sales to $173.9 million, according to Nielsen data.

Icelandic yogurt is thicker than Greek yogurt. That's accomplished by separating water and whey from the milk, leaving behind more solids, reported Minneapolis Star Tribune (April 20). Thicker, creamier yogurts like Skyr have a healthier edge over sweeter, more traditional kinds. A 5.3-oz. cup of Dannon yogurt with strawberries on the bottom has 22 grams of sugar. The same size cup of Siggi's — a brand of Skyr — contains half the sugar and three times the protein.

"Icelandic yogurt, it really follows the simply-better-for-you trend," General Mills Inc. CEO Jeff Harmening said in an interview in 2018. General Mills' Skyr offering, YQ by Yoplait, "hasn't been as successful," and the company is tweaking the formula. "The idea, people like a lot," he said. "But we need to make sure people like the taste."

Not only is Icelandic yogurt attractive to health-conscious consumers, but to the struggling American dairy industry. Recipes for one pound of the yogurt call for four pounds of milk - four times the amount needed to make traditional yogurt.

For more than four years, retail milk prices have been disappointing. In July, a gallon of whole milk cost $2.84 a gallon, the lowest price since at least 2007, according to USDA. In March, the price of a gallon stayed below $3 for a 15th straight month.

At Star Rock Dairy in Pennsylvania, revenue has been down about 20% as shoppers opt for plant-based milks and nondairy foods. Co-owner Rob Barley believes new high-protein items, like Icelandic yogurt, are the future of the dairy industry.

"That's just the way society is," Barley said. "They always want to try something new. That's a big disadvantage we've had in the dairy industry."