Aug 23, 2018
Will Cava Group Be Able to Acquire Zoe's Kitchen?
By Chris Campbell 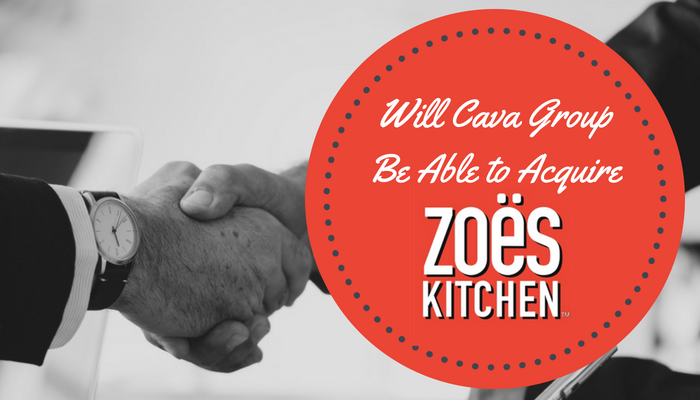 Cava Group is ready to acquire Zoe's Kitchen. The question is: will it be allowed to do so?

Zoe's Kitchen Inc., a fast-casual restaurant group boasting 261 U.S. locations, entered into a definitive agreement Aug. 17 to be acquired by privately held Cava Group Inc. The acquisition was valued at about $300 million, representing a premium of approximately 33% both to Zoe's closing share price Aug. 16 and to the company's 30-day weight average price. If the acquisition is approved, the combined companies' portfolio of stores would include 327 stores spanning 24 states in the U.S.

The acquisition will be financed through a significant equity investment in Cava led by Shaich's Act III Holdings and funds advised by The Invus Group, with participation from existing investors SWaN & Legend Venture Partners and Revolution Growth.

This, of course, is dependent on the closing of the deal. Using Rite Aid as a case study, this is all but certain.

In fact, a law firm is investigating potential claims against Zoe's Kitchen Inc. on behalf of stockholders concerning the proposed acquisition. The investigation concerns whether Zoe's board of directors failed to adequately shop the company and obtain the best possible price before entering into a definitive agreement.

Cava agreed to pay to Zoe's a $17 million termination fee if the merger agreement is terminated under certain circumstances and the merger does not occur. The parties expect the merger to close in the fourth quarter of 2018.