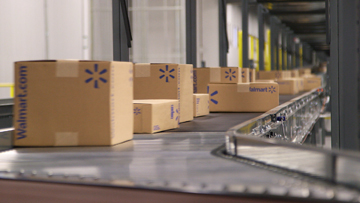 In-home delivery is not a new concept for 2018, but it may become a more common reality this year.

Late last year, Walmart and Amazon both began teasing programs that would allow its delivery drivers to bring packages directly into customers' homes. The services, which may be considered a bit scary for some, were touted as a way to protect against package theft and destruction, and in the case of food, keep items from expiring. Walmart even noted that delivery workers would be able to load purchases into a customer's fridge.

Some may worry about the security of a program like this, although both retailers outlined the measures they would take to make sure customers are keyed in to every step of the process, but with the current progression of the retail market, in-home delivery seems like the natural next step. Every e-commerce retailer is looking for a way to set itself apart, and the bar is constantly, and rapidly, being raised. New innovations continuously emerge like one-hour delivery, automatic re-ordering and increased personalization. It is also important to note that while customers may be leery now about letting a stranger in their home when they are not there, recent history has shown that they will trade a startling amount of privacy and security for convenience. And this will likely only continue as Generation Z ages and the majority of the population is made up of people who have never lived without a constant flow of technology.

Although I'm sure many people will still have their reservations about in-home delivery in 2018, it seems like more retailers will add it to their offerings this year. Smart lock startup August Home, which currently implements Walmart's in-home delivery program, is expanding its service to other retailers with its new platform August Access. August will expand its partnership with Deliv to give other e-commerce retailers the ability to offer in-home delivery to their customers, reported TechCrunch (Jan. 9).

Teaming up with Deliv gives August a built-in slate of partner retailers that already use Deliv to fulfill their delivery orders. Deliv claims to have a footprint roughly the size of Amazon's Prime Now service, and works with about 4,000 retailers like Macy’s and Plated. August Access will be listed as delivery option for retailers participating in the program, and those who have the required smart lock on their doors can select it at checkout.

When asked if he thinks customers are ready to let a delivery person into their home, August CEO Jason Johnson believes over time, and with the right support, they will be. He says company data shows about one third of American customers say they would not use the service, but about one-third are open to it. "We have to prove to them that this works," Johnson adds. "Think about other things we share now that we wouldn’t have before, think about Airbnb. You need validation from friends."

So maybe you won't see all of your neighbors letting the delivery guy into their house this year, but in two or three years, who knows?