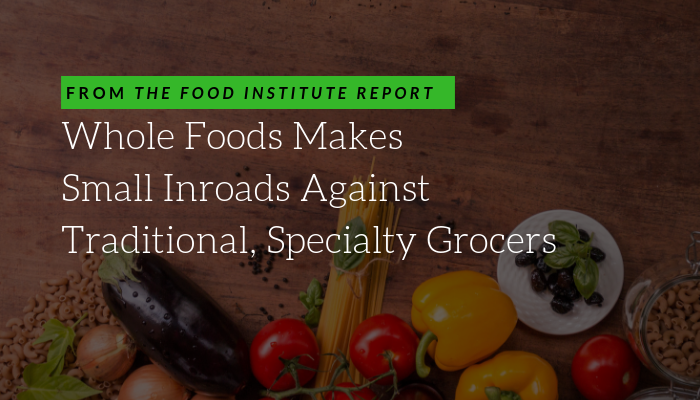 While Whole Foods is gaining ground in the grocery market, it’s taking longer than expected, as the grocer has to overcome its pricey reputation, among other barriers, before seeing real impact.

Morgan Stanley found Whole Foods’ prices fell just 2% in the year since being acquired by Amazon, reported Portland Press-Herald (Aug. 23). A basket of 60 items including fresh and processed goods costs $195, roughly 13% more than a typical conventional grocery store. The grocery’s protein products, including eggs, chicken and beef, were 28% costlier than the competition’s.

In August 2017, when Amazon bought Whole Foods for $13.7 billion, the industry expected the grocer to lower its prices. But while Amazon immediately cut some product prices, like bringing the cost of organic Fuji apples down by 43% on the first day of ownership, Whole Foods still has higher prices overall, except for deals given to Amazon Prime members.

“When Amazon bought Whole Foods, everyone thought … ‘Now I’m going to be able to buy quality stuff at Whole Foods at Amazon prices,’” said Kevin Brasler, executive editor of Consumers’ Checkbook, which recently conducted its own grocery price study in the Philadelphia area. “They’ve lowered prices based on our most recent research, but not a lot.”

But that doesn’t mean that Amazon and Whole Foods haven’t begun to take over market share from other grocers. Sense360 found that Whole Foods gained traffic at the expense of Trader Joe’s, Walgreens and Dollar Tree over the past year in more than 100 locations across the U.S., reported Bloomberg (Aug. 27). Additionally, the number of shoppers who visited Whole Foods at least six times in the past year increased to 11% from 9%, according to data from research firm TABS Analytics.

A large-scale disruption of the grocery industry has yet to happen, as grocers like Walmart and Kroger have more than managed to hold their own. Industry analysts believed Amazon would force other grocers to lower prices and sacrifice profit margins, but the result has beeTn the opposite, says William Kirk, an analyst at RBC Capital Markets.

Whole Foods still remains a niche, urban chain with only about 470 stores, compared to Walmart’s over 4,000 stores and Kroger’s almost 2,800 locations, which are mostly located in suburban markets. Strong food sales are fueling investor optimism in Walmart, the biggest U.S. grocer with 25% of the market compared with Amazon’s less than 2%.

While traditional grocers have come to recognize that it will be years before Amazon becomes a major player in the $800 billion industry, Amazon is proving to be more of a threat for Trader Joe’s and other regional urban supermarkets, though not for specialty food stores.

Some natural grocers claim they have attracted new customers in the past year because of better service and more local products, while others have focused on lowering prices.

“We’ve been hyper-focused on price,” said Ben Friedland, vice president of marketing at Lucky’s Market, a 31-store natural food chain based in Colorado.

Sales for Lucky’s have remained steady since the Amazon/Whole Foods deal, but it did speed up the company’s rollout of online ordering. Kemper Isely, CEO of Natural Grocers, says sales are up and that the grocer is expanding its network of 147 stores, while Sprouts Farmers Market is seeing similar success, according to Spins.

At the same time, specialty grocers point out Whole Foods stores have become more mainstream, stocking more conventional brands and displaying them more prominently. Whole Foods executives say its centralization push is helping the chain become more efficient and promote products better, and that the company still works with local suppliers in getting their goods on shelves.

“After they put their blue signs all over everything and started selling Amazon Echos, it really kicked in that this is no longer this specialty, healthy chain,” says Tony Antoci, CEO of California’s Erewhon Market, where same-store sales are up more than 20% from a year ago.

Even so, the Sense360 data, which covers Whole Foods locations within one mile of competing stores, shows Amazon can lure loyal Prime members to physical stores with discounts. Whole Foods just needs a lot more stores to be close to more people and is getting traction at the “micro” level, says Sense360 CEO Eli Portnoy.

In February, Amazon began offering Prime members 5% back on all Whole Foods purchases made with an Amazon-branded Visa card. The company followed that up in June with Whole Foods deals exclusively for Prime members including 25% off bulk purchases of nuts and dried fruit and discounts on wild-caught salmon, organic cherries and hundreds of other products.