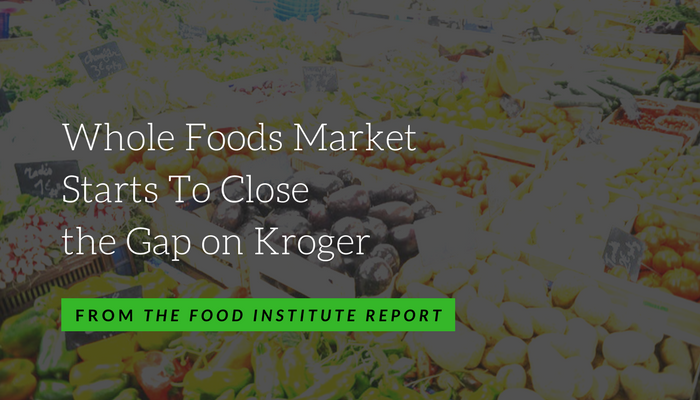 About one third of consumers shop more at Whole Foods now than in Aug. 2017, according to a report of the Cincinnati, OH, and Dallas, TX, markets from Barclays. The two markets were chosen by the financial institution as they were the first markets to offer free two-hour delivery via Amazon prime Now to Whole Foods Market customers, and Kroger has a dominant share in both.

Barclay’s concluded that home delivery could be a game-changer for Whole Foods Market as demand for home delivery is underappreciated by many food retailers. In February, Whole Foods Market shoppers in Cincinnati, Dallas, Austin, TX and Virginia Beach, VA, were able to receive free two-hour delivery through Amazon Prime Now, which was extended to Atlanta, GA, and San Francisco, CA, in March and expected to roll-out to additional markets later this year.

If customers view Amazon Prime as a sunk cost, Whole Foods has the lowest cost, according to Barclays. After factoring in the cost of items purchased, differences in basket size, delivery fees and credit card incentives, Whole Foods Market two-hour delivery is actually priced at a discount compared to Kroger/Instacart ranging from 2%-7% for baskets $35-$50. With about 75 million Prime members in the country, around 60% of U.S. households, it is likely that many customers will not view the cost as incremental.

The survey found about 33% of respondents in both markets indicate they shop more at Whole Foods now since August 2017, with the numbers rising significantly among younger age groups. Both markets already have high mid-teens e-commerce penetration rates, but 87% of e-commerce users plan to shop at Whole Foods more frequently following the launch of Whole Foods Market on Prime Now.

Additionally, Whole Foods Market may be narrowing its price gap with Kroger. Whole Foods’ total basket was 14% higher than Kroger in Cincinnati, including sale/loyalty card prices. Barclay’s commenting that the price gap was narrower than expected, perhaps due to Kroger feeling less of a need to be a price leader in its hometown given its dominance.

For the full story, go to this week’s Food Institute Report. Click Here