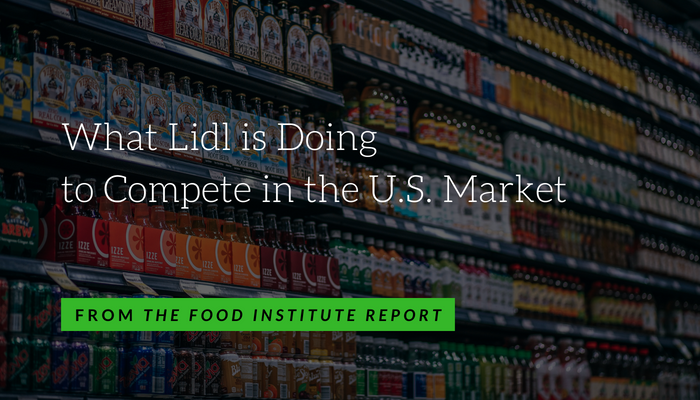 Lidl’s entrance into the U.S. has been well received by consumers, notably those who are usually loyal to an incumbent grocer, as well as the younger demographic. While 46% of customers say their primary reason to shop at the chain is either good quality, good promotions or fresh products, 39% cite low prices, according to a survey from consulting firm Oliver Wyman. Younger customers were found to value quality almost as much as low prices when it comes to grocery items.

Forty-eight percent of consumers who tried Lidl are now shopping there on a regular basis, and many are spending more per shopping trip at the chain than a year ago. It’s significant that the Lidl customer now shops there an average of two to three times per month, given that the U.S. consumer usually shops for groceries about 10 times per month.

What’s likely drawing the Lidl customer away from other grocery stores is value perception, a category where the company beat all other grocery retailers. In addition, customers put Lidl’s assortment on par with Walmart and Food Lion, despite the assortments at those stores being many times greater, the survey noted. Lidl was perceived as having the best fresh food, as well.

Fifty two percent of Walmart customers indicated that they shop at Lidl at least two to three times per month, and the numbers for Kroger and Aldi are similar. Aldi shoppers are splitting baskets into multiple trips, which could be a concern for supermarkets and hypermarkets, whose focus is on capturing the vast majority of their consumers’ spend.

Hard discounters are in the U.S. to stay, and incumbent grocers must evolve to align with the consumers’ demands for high quality and value, noted George Faigan, an Oliver Wyman partner. He added that grocers must double down on what they believe makes them unique and attractive to consumers.

As Lidl has opened additional locations in the U.S., customer satisfaction has been on the rise.

This is likely due to Lidl gradually adapting its U.S. model based on consumer feedback, a pattern it honed entering more than 20 countries in Europe, said Tanja Ebner, a principal at Oliver Wyman. For example, the retailer reduced its fresh-food promotions. Initially, Lidl rotated these twice a week, as it does in Europe, but after four months in the U.S., this went down to once a week.

The company operates more than 50 stores in six states, with plans to enter New York, Maryland and Pennsylvania. Customers cite difficulty in reaching stores as the top reason for not shopping more often at Lidl.

In The Food Institute's recent webinar "Achieving a self-sustaining business model: Top 3 trends companies need to think about post-COVID-19," Greg Wank, CPA, CGMA, partner and leader of Anchin's food and beverage group, as well as David Eben founder and CEO of Carrington Farms, discussed how to have a more successful business while burning less capital and attaining self-sustainability. The following summarizes the...