Apr 24, 2018
For Warehouse Clubs, the Price is Still Right
By Chris Campbell 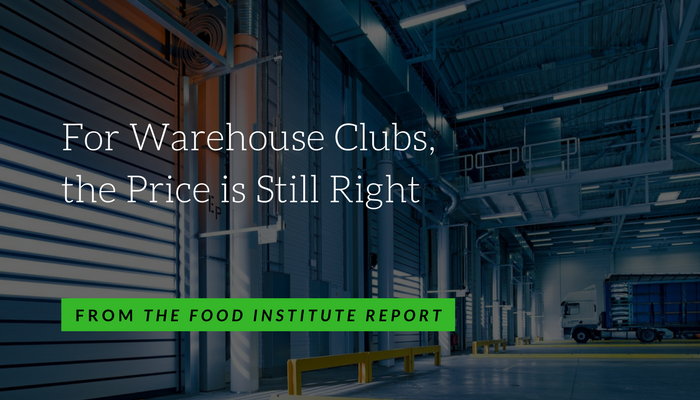 Warehouse clubs are continuing to attract customers with their price, according to a study from HSA Consulting, reported Progressive Grocer (March 29).

When comparing retail prices for 97 perishable, dry grocery and sundry items in 19 categories in Miami, FL, Costco was the least expensive overall, and the top three club chains’ average prices were 24% cheaper than Walmart and Amazon, and more than 53% cheaper than Publix Super Markets for dry groceries and sundries. The price gap widened even further when perishables were added, the study found.

Club bulk-pack pricing and supermarket loyalty card prices both affected the study results, but no allowance was made for premium club member “cash back,” which would further reduce club prices by 1% to 2%, according to HSA Consulting.

But are warehouse clubs well placed to compete with Amazon? Many factors point to yes.

In The Food Institute's recent webinar "Achieving a self-sustaining business model: Top 3 trends companies need to think about post-COVID-19," Greg Wank, CPA, CGMA, partner and leader of Anchin's food and beverage group, as well as David Eben founder and CEO of Carrington Farms, discussed how to have a...