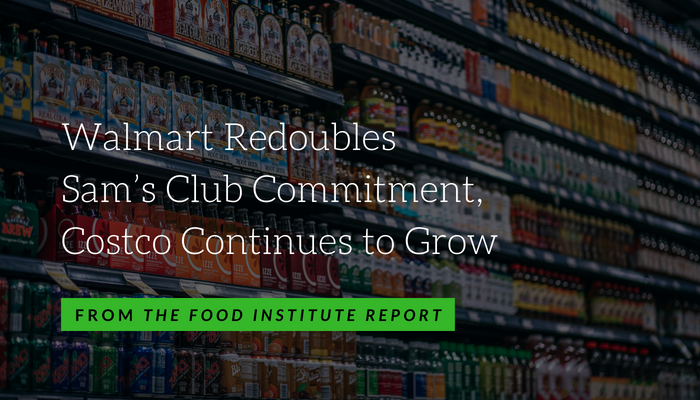 “Sam’s Club needed some work,” says Walmart president, CEO and director Douglas McMillon. “[Sam’s Club executive VP, president and CEO John Furner] and I and others in the company know from all the years that we’ve invested there that because we grew Sam’s partially through acquisitions, we didn’t relocate some of those clubs over the years like we should have. We needed to deal with some clubs, and so we now have.”

One way Sam’s Club hopes to improve the customer experience is by opening a smaller-format location in Dallas that will focus on convenience. The 32,000-sq. ft. store will feature expanded digital offerings and focus on grocery and fresh food items, such as grab-and-go meals, as well as Sam’s Club pickup and delivery services.

In addition, the company narrowed its target consumer down more specifically to an income of $75,000 to $125,000, said Furner.

“We went through price, location, product, a number of things to ensure that we were doing the right thing for those members,” Furner says.

The company’s work on the digital side is an “incubator” for how the company “can become more member-centric, more efficient and hit the mark as it relates to serving members in Sam’s Club,” McMillon says.

Sam’s Club decided in January to transition some of its former locations to e-commerce fulfillment centers, Furner says, and will likely need to add more.

“It took about 46 days from the day we made the decision until we were shipping packages out of the first center, which is in Memphis, TN,” he says. “[The fulfillment centers] give us the ability to have the core of the assortment. With Sam’s Club being a curated assortment, just down to a few thousand items, it gets the core of our assortment where we can deliver …really efficiently within a couple of days by ground all around the country.”

Looking at the competition, “we need to be ready to operate in different types of environments. I think gross margins over time are set somewhat by market, somewhat by competitors,” says Walmart executive VP and CFO Brett Biggs.

For its own part, Costco plans to open 13 U.S. stores and relocate two others in the fourth quarter, as well as continue to focus on growth in its newer international markets. While Costco’s focus on growing sales from fresh food and its private label is in line with Sam’s Club’s plans, Costco differs in that it’s delving more into the protein category and delivery.

“We’ve been fortunate to have a few different buckets of monies to be able to do a lot of things, starting with the credit card transition, continuing with membership fee increase, continuing with the income tax and add in some of the Sam’s closings,” says Costco CFO Richard Galanti.

In addition, Costco is targeting different areas for expansion than Sam’s Club.

Costco estimates 10% to 20% of its sales were the result of the two or three Sam’s Club locations that closed in Costco’s existing market. Sam’s members might have felt they lived too far from a Costco location or chose to take their business to another existing Sam’s Club.

Costco owns 80% to 90% of its international locations, and uses this approach in the U.S., as well. Its subsidiaries are very limited, including its Kirkland Signature brand. Sam’s has seen success with its own private label, Member’s Mark.

Costco is building its business in markets including Spain, France and Iceland.

“We start with a slow volume building as expected in some new countries,” Galanti says. “You’re pricing your fresh foods as if you’re doing a lot more business, and you’re going to have some cases of very low or negative gross margin sometimes. So, I think [with] the timeline, we’re patient. We’re also not going into any market and trying to get 10 or 20 openings in one year or two years.”

Costco’s dry grocery two-day delivery and same-day fresh delivery through Instacart, which were rolled out in October 2017, continue to grow.

“We clearly are getting some customers, in the case of the two-day…that we never had before because we are 50 to 100 miles away from the nearest physical Costco. It is too early to tell what impact, if any, it has in terms of same-day grocery. Historically, you saw perhaps an existing member shop a few less times that year, but shopped several times online; in some cases there is this fill-in and they are still coming in,” Galanti said.

While many consumers seek out Costco for its value, fresh food sales have benefited the company as well.

“Certainly, fresh foods [help us] and what we have done there in terms of the quality and the consistency and coming up with new items,” Galanti says.

The Kirkland Signature private label brand makes up about 25% of overall sales.

“Years ago, I said, well, you’ll never see [the private label] on this, and now it’s on that. In our view, it enhances our brand value. I’m sure it will [increase], but I can’t tell you how long that will take.”

Costco’s SKU count is approaching about 10,000, while Sam’s Club offers a much smaller range of very specific SKUs.

“We don’t see it getting a lot bigger, but you keep in mind over the last couple of quarters we’ve added lots of what I call velocity items, food and sundries items … which is getting people to open their emails if you will and think about coming back more often to take a look without us having to remind them,” he says.

Even with Costco raising its annual membership fees to $60 a year, compared to Sam’s $45, U.S. and Canadian membership renewal rates in the third quarter were 90.1%, Galanti noted.

Two large-budget items for Costco are a chicken plant in Nebraska that will open in a year-plus, while the new bakery commissary in Canada is expected to take the same time to increase capacity. In March, Costco opened a second meat plant outside of Chicago, which took over some of the overflow from the Tracy, CA, plant.