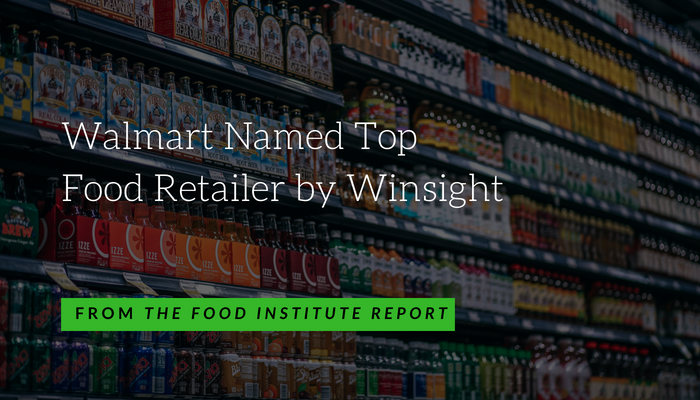 Walmart was named number one on the Top 20 Food Retailers list, while The Kroger Co., Walgreens Boots Alliance, CVS and Costco Wholesale Club rounded out the top five, reported Winsight Grocery Business (July 17). The top 20 list was based on Kantar Consulting Sales data and included 10 traditional grocery retailers, as well as 10 retailers from the mass, drug, club, dollar or convenience spaces.

Walmart is winning new sales and gaining shares, even though this is the first time in the company’s history that it’s not adding hundreds of new U.S. stores. Online grocery pickup is now offered at more than 1,400 locations. In addition, Walmart is emphasizing both convenience and price, and the company is widening its advantages as it zeroes in on the competition from discount retailers and Amazon, according to analysts.

The Kroger Co. is in the midst of a strategic plan to regain sales. The retailer’s $900 million, three-year Restock plan prompted new investment in the meal-kit company Home Chef and a plan to license e-commerce technologies from UK retailer Ocado.

Walgreens Boots Alliance operates one of the largest pharmaceutical wholesale and distribution networks in the world. The firm is expanding its grocery offerings stateside, and is the first drug retailer in the U.S. to offer a line of Chef’d meal kits to 30 stores in Chicago and New York under the Walgreens and Duane Reade banners, respectively, through a partnership with Smithfield Foods.

CVS has made healthy foods a major part of its front-of-the-store offering, which is being showcased this spring in a comprehensive store redesign.

Costco Wholesale Club turned around its yearlong sales slump in early 2017 and saw its e-commerce business jump 37% during the most recent quarter. The company is known for its employer-of-choice practices and recently raised its minimum wage to $14 an hour.