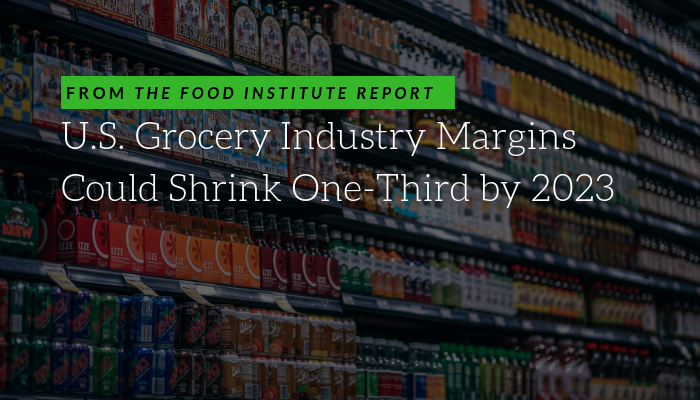 Food retailers are likely to be pressured by low online penetration and a highly competitive market through 2023, according to research from Morgan Stanley. While the U.S. grocery industry generated $840 billion in sales in 2017, growing 4% annually, and is the largest retail category at 18.5% of sales, the grocery category has the lowest online penetration in the U.S., at 3%, compared to more than 10% for total retail sales.

Online grocery penetration is higher in most large global markets, with South Korea leading the way, at 10%. But Walmart and Kroger intend to double their click and collect footprint over the next few years, as locations at large grocers grow 80% year over year by the end of 2018. Amazon’s two-hour delivery through Prime is quickly expanding as well, from four locations in February 2018 to 48 stores in September 2018.

While grocery is vulnerable to disruption due to low margins, high fixed costs and high fulfillment costs, penetration could remain low, as consumers prefer to shop in-store and shipping fresh food is difficult and expensive.

An annual UK Food Retailer AlphaWise survey showed that from 2012 to 2018, Aldi and Lidl’s combined market share grew to 18% from 3%. Morgan Stanley notes the U.S. is in the early stages of a similar shift. Among U.S. consumers who switched grocers, 19% chose Aldi, up from 15% in 2017, which was the largest year-over-year gain by any grocer.

Morgan Stanley believes it will be difficult for conventional grocers to catch up to hard discounters on price. For instance, Aldi’s price gap is largely driven by its high private label penetration, which accounts for 90% of SKUs. Aldi’s prices were lowest for a basket of 12 typical grocery items, at $21.10, compared with conventional grocers, which averaged $33.13; with Kroger at $26.28; Walmart at $26.25; and Lidl at $23.47. Discount retailers are adding a larger selection of fresh products to expand their offerings and appeal to more upscale consumers, which will likely only heighten competition.

Due to their aggressive store expansion plans and low prices, hard discount retailers are seen as disruptors in the grocery category. Hard discounters are expected to grow at a CAGR of 6.6% through 2023, up from a CAGR of 4.6% from 2013 through 2017. U.S. grocers could experience 0.5% of cumulative market contraction from 2019 to 2023 as hard discounters gain 2% share.