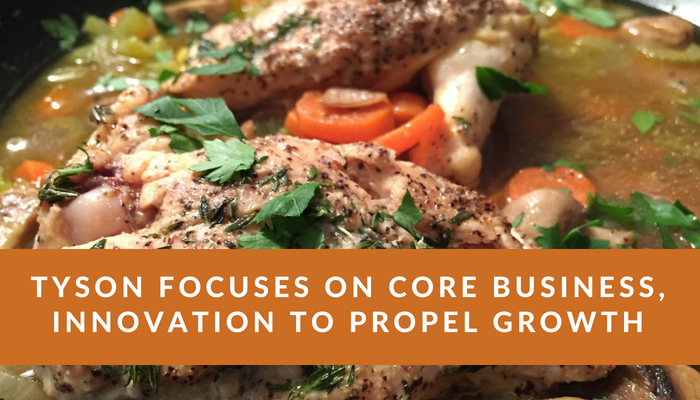 When it comes to growth, focusing on a core business while simultaneously pursuing innovation can propel growth. And Tyson Foods Inc. appears to be employing this very strategy.

Within the span of a week, the company sold parts of its business and acquired a promising addition. Tyson unveiled that it would sell its Sara Lee Frozen Bakery and three other non-protein brands to private equity firm Kohlberg & Co. The deal includes the sale of Chef Pierre, Bistro Collection and breakfast brand Van's, reported Reuters (June 1). The company then acquired Tecumseh Poultry LLC, a producer or organic fresh chicken and chicken sausages, June 1. The Nebraska-based company is best known for its Smart Chicken brand, and the acquisition includes two Nebraska plants and a live-chicken supply operation.

The business moves make sense when considered in context of the larger food industry. Although frozen foods represent about $53 billion in business annually, this number only represents 6% of the total food industry. And in recent years, sales of frozen foods have dropped as consumers instead opt for fresher foods, reported NPR (May 8). The Smart Chicken brand provides Tyson with an established, organic chicken brand that plays directly into changing consumer tastes that want fresh and free-from foods.

The expansion in chicken will complement its Tyson Fresh Meats division. The division is investing nearly $44 million to upgrade its pork processing plant in Perry, IA, including plans to upgrade its cooling system to help open new markets in Japan and elsewhere, reported Des Moines Register (May 17). A few days before the unveiling of this investment, the company noted it agreed to acquire the poultry rendering and blending assets of American Proteins Inc. and Ampro Products Inc. for $850 million. The equipment was expected to enable Tyson to recycle more animal products for feed, pet food and aquaculture, reported MarketWatch (May 15).

However, acquisitions aren't the only way the company is growing.

Tyson's innovation lab launched a brand of protein crisps dubbed "Yappah" that "upcycle" food waste. The crisps, which use trimmings from Tyson's chicken, spent grain from beer brewers and vegetable pulp from juice stores, are the first product to be marketed under the brand. It plans to create another product under the brand after gathering data from the crisps' test. The goal is to move Yappah out of the innovation lab and into a Tyson business unit as a full-fledged brand, reported Crain's Chicago Business (May 31).

Along the same lines, the company partnered with Flashfood Inc. for a three-month pilot in Detroit, MI, to procure, package and sell edible food that grocers will not sell. Flashfood orders surplus food from Tyson that may be deformed or have less than 30 days of shelf life, and sends it to be processed and packaged with surplus fruits and vegetables provided by other producers. The target demographic is women 25-35 years old and young families, reported Crain's Detroit Business (May 2).