Sep 6, 2018
Tyson Wants to Build on Strengths as a Protein Company
By Chris Campbell 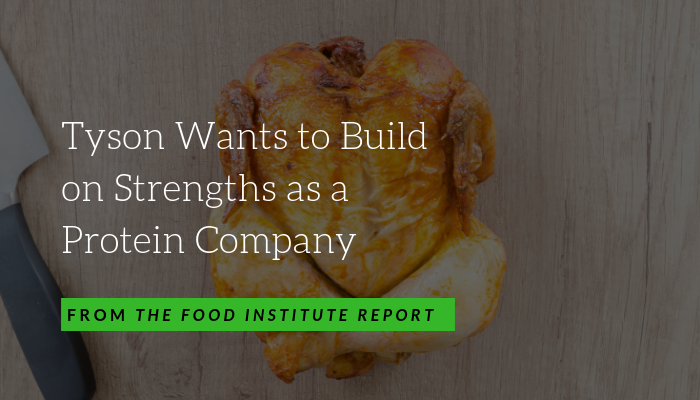 As part of this transition, Tyson and other packers are investing human and financial capital in a digitization initiative, as well as interacting with their customers in new ways, says Janette Barnard of analytics firm DecisionNext. Traditional supply chains are being completely disrupted, becoming shorter and more transparent, Barnard says, noting feedyards, backgrounders and cow-calf producers will see an impact.

A major part of Tyson’s strategy this year has been to sell several of its non-protein businesses, said president and CEO Thomas Hayes on a third-quarter earnings call Aug. 6.

The company will sell its pizza crust business in the fourth quarter to an affiliate of Peak Rock Capital. The sale includes TNTCrust, which produces partially-baked and self-rising pizza crusts for frozen pizza manufacturers and foodservice customers.

The company is moving away from these non-protein businesses to make way for the addition of companies like Keystone Foods, which it will acquire from Brazil-based Marfrig Global Foods for about $2.2 billion. Keystone, a major chicken, beef, fish and pork supplier for quick-service restaurant chains, and grocery and convenience stores around the world that generated $2.5 billion in revenue in the past year, will be essential to Tyson’s growth strategy.

The acquisition includes six U.S. processing plants and an innovation center in Alabama, Georgia, Kentucky, North Carolina, Pennsylvania and Wisconsin, as well as eight plants and three innovation centers in China, South Korea, Malaysia, Thailand and Australia. Keystone exports to key markets in Europe, the Middle East and Africa. Last year, about 65% of the company’s revenue came from U.S.-based production, while the remaining originated in Asia Pacific plants.

“We are focused on the same areas, the assets that are going to bring brands, new capabilities or new geographies to Tyson,” Hayes noted, adding that the company is looking to acquire companies that will deliver some scale and synergies that will put Tyson in a strong position.

In May, Tyson announced plans to acquire American Proteins, and the company acquired Tecumseh Poultry, producer of the Smart Chicken brand, the following month.

“This acquisition gives us a well-known brand of organic chicken with national distribution and the ability to scale up in this fast-growing category,” Hayes said.

Looking ahead, Tyson plans to invest $1.6 billion on capital improvements in 2019.

“One project we have underway is to redo our distribution network, said Stewart Glendinning, the company’s CFO.

While Tyson saw $270 million more in freight costs this year, the company plans to recover from the increase when new pricing terms take effect.

Despite current trade issues, global protein demand continues to grow, Hayes said. But the company is still dealing with short-term challenges in the pork and beef categories.

“Having the pork business and the beef business return to stable, not the uncertainty that exists today, is critically important,” Hayes said. “Exports are a huge part of the equation.”

The company expects beef to do better over the longer term.

“With the beef segment, we believe it will finish fiscal 2018 with operating margin above 6% and similar results expected in fiscal 2019,” Glendinning said. “The cattle supply appears to be set up well for fiscal 2019 and supply should be adequate into 2021.”