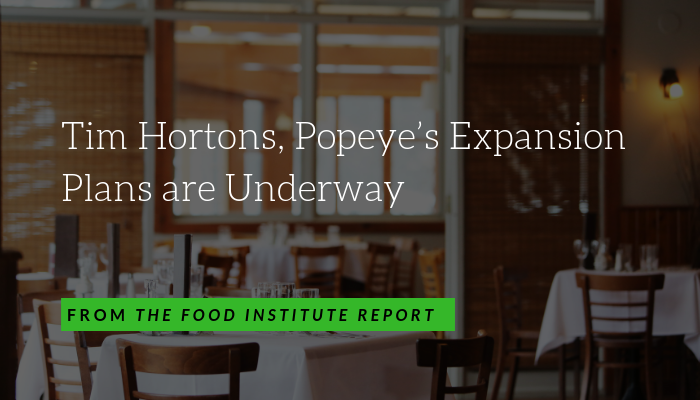 Restaurant Brands International (RBI) is finding that for its Tim Hortons brand, it’s all about location. While Tim Hortons’ same-store sales in Canada reflected a growth in cold beverages, breakfast foods and lunch in the second quarter, its U.S. locations saw weakness in brewed coffee and baked goods, according to a second quarter earnings call Aug. 1.

In the U.S., Tim Hortons closed four of its five Cincinnati area locations, reported Cincinnati Business Courier (Aug. 7). To offset some of the issues there, the chain is looking to introduce new store models and new products to the U.S. market.

Despite the challenges in the U.S., its locations in Canada are seeing success with its Breakfast Anytime program. While the restaurant chain traditionally only serves breakfast until noon, Quest data showed breakfast foods as the fastest-growing products in the PM daypart, appealing to roughly 75% of consumers, with roughly 60% indicating they would likely buy a breakfast sandwich after 12 noon. Tim Hortons sees breakfast as a significant incremental takeout opportunity, with one-third of guests saying the Breakfast Anytime program would increase their overall frequency of visits.

“As the market leader in breakfast...we believe we're well-positioned to capitalize on this evolving consumer demand,” said CEO Daniel Schwartz. “But we wanted to ask our guests directly before pursuing the initiative.”

In addition to changes to food offerings, Tim Hortons has packaging updates in store, and is making progress on a larger scale with its new store design, which will be implemented by the majority of stores in Canada by 2021.

Tim Hortons is excited about its growth prospects in countries like the UK, Philippines and China, even though plans are still in the early phases. The growth strategy in each country varies, and the strategies are in different stages, Schwartz says.

A China master franchisee deal is in the works as well. While some competitors have failed in establishing a presence there, Tim Hortons is basing potential growth in China in part on RBI’s success with Burger King there.

“In 2012, Burger King had around 50 restaurants in China, and last year we crossed 800,” Schwartz said. “We’ve proven in short periods of time that we could rapidly increase and expand the size of our restaurant portfolio in a profitable way for our partners, which gives us conviction that over the long run we'll be able to do the same with Tim’s.”

In addition, Tim Hortons is making a $75 million investment to expand and modernize its Canadian distribution network, with the bulk of projects taking place in 2019. The plan includes the construction of two new warehouse facilities in Alberta and British Columbia as well as the significant expansion of an existing warehouse in Nova Scotia.

On the in-store level, Tim Hortons is making strides with delivery in Canada, partnering with Skip The Dishes to test delivery in three cities in July.

As for Popeye’s, delivery tests in the U.S. have done well, and the company is expanding the program at a quick pace.

“We've moved fast on Popeye’s,” Schwartz said. “We saw how strong the delivery sales were when we got involved, and we rapidly accelerated the pace of delivery rollout for the brand in the U.S.”

Popeye’s signed one development agreement in Brazil so far, and the company is working closely with its partner there in anticipation of its first openings in the country by the end of 2018. Early talks are underway in other countries as well.

Four years before COVID, a market analysis report by Grand View Research predicted the global food robotics market would attain a value of approximately $3.4 million, with a CAGR of 13.1% by 2025. COVID has rapidly accelerated the growth of...