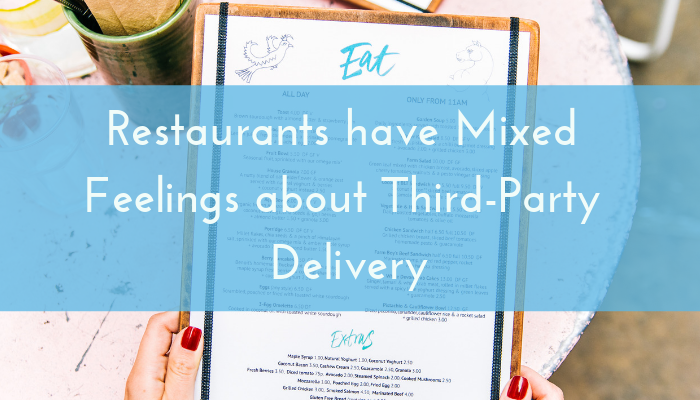 Food delivery services are becoming increasingly popular, but not every restaurant is convinced.

Delivery apps like Grubhub, Uber Eats and Postmates are changing the way people get their meals. People are now able to select food from a huge number of restaurants, without even having to leave the house.

The $13 billion third-party food delivery market is projected to grow at a 13.5% annual rate, according to Pentallect. That's almost five times the total food industry rate.

However, one national chain elected to stick to its own in-house program. Jimmy John's recently launched a marketing campaign vowing to never use delivery apps such as Uber Eats, Grubhub and Door Dash.

The company is the first national restaurant chain to come out publicly against third-party delivery apps, according to The Verge. "We are, faster, fresher, better value and more consistent at delivery than the third-party services," James North, CEO of Jimmy John's told The Associated Press.

The company says its 45,000 drivers can best ensure fast, quality service. "We just don't trust anybody else to deliver our product," said North.

Though it may be the first to speak out against them, Jimmy John's isn't the only company to reject third-party delivery. Domino's, Panera Bread and Olive Garden also made the choice not to use them, reported NBC Chicago.

Domino's has been delivering its own pizzas for 60 years, and Olive Garden tested third-party delivery but claims its customers weren't satisfied.

In some cases, these services can take longer than ordering directly from a company and can be unreliable. Additionally, delivery services eat into a restaurants' profits. Grubhub charges a commission of 12-18% per order; Uber Eats charges as much as 30%.

Meanwhile, Taco Bell and Dunkin' seem to have different feelings toward the third party delivery business, because both companies recently launched partnerships with GrubHub.

On Feb. 7, Taco Bell unveiled that it would be making delivery available nationwide with Grubhub. The partnership was "uniquely designed for an even faster experience." The company said it integrated its point-of-sale system directly into the Grubhub app, allowing for pickup to be timed to the moment an order is ready.

"Our approach to delivery is a recipe for success all around, not only benefiting our customers but also our team members, franchisees and Grubhub drivers, by streamlining how orders hit our kitchens and when they are picked up," said President of Taco Bell, North America, Julie Felss.

Dunkin' CEO Dave Hoffmann said on an earnings call that the company would be partnering with Grubhub for a delivery pilot which integrates directly with its point-of-scale system. "Grubhub is number one in the delivery space and we are excited to add them to our list of high-quality partners," said Hoffmann.

As the food delivery space becomes more and more competitive, and now more restaurants opting for in-house delivery, it will be interesting to see who stays afloat in the industry.