Jun 19, 2018
What Consumers Can Expect from the Future McDonald’s
By Chris Campbell 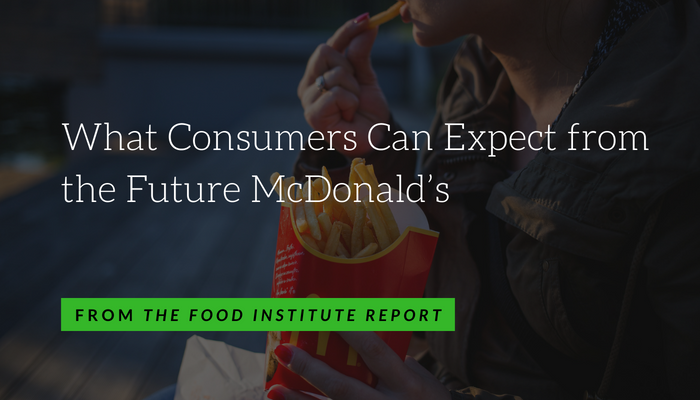 McDonald’s is modernizing its locations around the world, introducing new menu items and expanding its technology offerings as part of an overall growth plan for the company.

“We are going to have 8,000 restaurants dramatically, as I say, representing and expressing the kind of brand direction of the journey that we are on. And before you know it, more people in the U.S. will live near a great looking restaurant than not,” McDonald’s president and CEO Steve Easterbrook stated at the Bernstein 34th annual Strategic Decisions Conference 2018.

Australia, Canada and the UK’s locations have nearly all been modernized, but the company is still working on that in the U.S.

“We are investing right now about $1.5 billion of capital in the U.S. in 2018 and likely a similar amount in 2019, just to be able to get substantially all of our restaurants completed by the end of 2019,” says McDonald’s CFO Kevin Ozan. “There will be some that spill over into 2020.”

The U.S. can learn from the company’s other lead markets as it completes its modernization, Easterbrook noted.

McDonald’s new items have included fresh beef quarter pounders, and the company is building out its signature menu options, especially for the breakfast menu.

“You may see different products coming on the $1, $2 and $3 Dollar Menu related to breakfast. You may see new products by the end of the year. So, it’s now an area of focus where I think we took our eye off the ball on breakfast,” Ozan says.

In addition, the company re-established its partnership with Disney.

“That is going to give us a much more compelling, exciting Happy Meal premium lineup. And actually, also into the adult space given the access we have through whether it’s the Star Wars franchise all the way back to The Incredibles,” Easterbrook noted.

In terms of delivery, it’s been introduced at about one third of McDonald’s locations around the world, after being tested in the Asian market.

“And at one point, Steve basically said, I am pretty sure that there is a demand out there for people who want the convenience of getting their food delivered, do we really need to test it in every market for several years, which is kind of how the old McDonald’s would have done,” Ozan noted. “And instead we said, ‘you know what, there is definitely consumers who want the convenience of having their food delivered, let’s just go at it’.”

While the U.S. is still behind some international markets that have seen 50 to 100 daily guests with delivery, that part of the business has still been a significant area of growth, and caught on more quickly than mobile order and pay, for example, Ozan says.

With delivery, U.S. customers are spending twice what they normally would spend.

“And you mentioned ticket size, it’s about two times our normal ticket size. So, it’s a higher average check, as well,” Easterbrook noted. “All that part of our business comes after 5:00 in the afternoon. So that is part of how you know it’s incremental. And it’s also satisfying a customer base that may just not come otherwise as well, so you’re re-engaging.”

McDonald’s is using third-party delivery in nearly all its markets. However, there are still a few markets in Asia that use a mix of some in-house and external parties.

Casual dining concepts have seen 58% less traffic since the start of the pandemic, whereas fast food restaurants only experienced a 30% decrease, according to a report from read more