Apr 16, 2018
Taking a Stroll Through the Food Court
By Chris Campbell 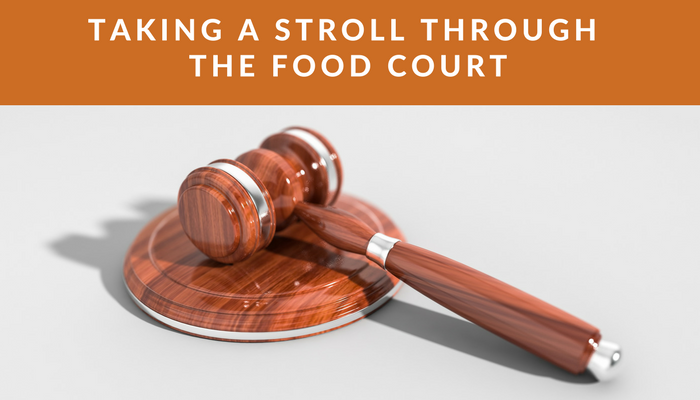 Let's take a stroll to the food court, shall we? And no: I'm not talking about the eateries in your local mall. Rather, I'm speaking of recent food lawsuits filed regarding labeling issues.

First on the docket is a case that alleges StarKist Co.'s canned tuna products are misrepresented due to the placement of the American Heart Association's Heart-Check Mark on the can's label. The suit, which seeks class action status, alleges the can is deceptive as it could cause a consumer to believe the product is healthier than those made by competitors, reported Legal Newsline (April 13).

The crux of the case is the label itself: the plaintiff argues that company failed to disclose that it paid to use the Heart-Check Mark. Filed in New York, the plaintiff requests a trial by jury and seeks judgment for injunctive, declaratory, and equitable relief, monetary damages, reasonable costs, expenses and such other and further relief as the court deems just and proper.

The complaint argues class members were deceived as the products contain artificial flavors, but that fact was not disclosed or labeled in the packaging. The plaintiff alleged the products contains a synthetic flavoring chemical listed as malic acid, which simulates the flavor of an actual fruit.

Lastly, a lawsuit seeking class action status in California contends Campbell's V8 Splash product contains artificial flavoring despite label claims to the contrary. The suit argues the drinks contain less than 2% of the juice the products are named for and are made up primarily of water and corn syrup, reported Legal Newsline (April 13).

The lawsuit lists advertising agency Y&R as a defendant as well, arguing the companies in tandem failed to diosclose artifical flavors in the drink. The plaintiff requests a trial by jury and seeks judgment for punitive damages, order requiring the defendants to conduct corrective advertising, attorney fees, costs and such other and further relief as the court may deem just, equitable or proper.

This is but a small sample of the cases we run regularly in Today in Food. For those looking for more information regarding legal labeling standards, I'd invite you to purchase a copy of The U.S. Food Labeling Guide IV, authored by OFW Law. Additionally, a recording of the Jan. 2018, webinar, "Avoiding the Food Labeling Class Action Trap - Update 2018" can be viewed here.