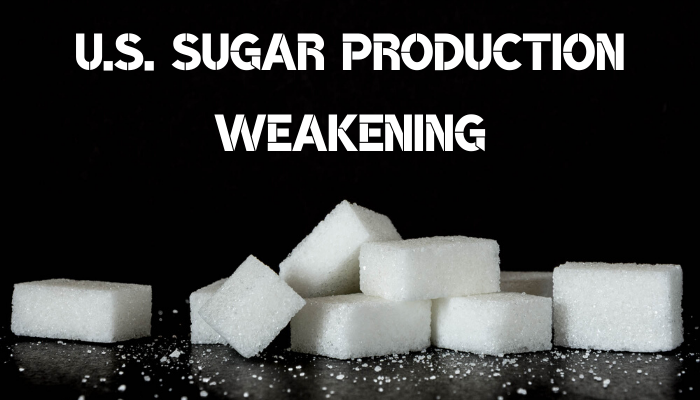 In recent weeks, prospects for U.S. sugar production have declined significantly due to adverse weather in both sugar beet and sugarcane regions.

USDA will take action to ensure an adequate supply of sugar on the U.S. market, according to a press release. In the Nov. 2019 World Agricultural Supply & Demand Estimates Report, the U.S. sugar production projection declined by 572,000 short tons raw value from the previous month, with ongoing weather concerns threatening further reductions.

USDA will be addressing options in the near future in order to stabilize U.S. sugar supplies. It intends to make an announcement before Dec. 10 on the quantity, type and source of the additional sugar needed to ensure sufficient supply for the domestic market, avoid forfeitures and prevent or correct market disruptions.

The fall harvest has been particularly difficult for Minnesota's sugarbeet farmers, reported Minnesota Public Radio (Nov. 14). Starting in October, fields were too wet for many farmers to dig beets from the ground. Then, over the past two weeks, a series of frigid days froze the unharvested beets still in the fields. Nearly one-third of this year's crop remains frozen in the ground.

Beets account for more than half of the 8 million tons of sugar produced in the U.S. every year and sold in stores or used in food production. Sixty percent of U.S. sugarbeets are grown in Minnesota and North Dakota.

"This is far and away the worst [year], as far as beets left in the field," said Dan Younggren, who has raised sugarbeets near Hallock, MN, for about 40 years. "It's a devastating hit to all of agriculture right now."

Additionally, some farmers now have to pay their cooperatives for the beets they were unable to harvest. The largest sugarbeet co-op in Minnesota is American Crystal Sugar, which planted nearly 390,000 acres of sugar beets this year—with about 118,000 of those remaining in the ground.

The operating costs would normally come from the sale of sugar, but because the cooperative will be processing a third fewer beets this year, farmers will need to shoulder the extra cost.

Meanwhile, Michigan Sugar Co. subsidiary AmCane Sugar LLC will close its refinery in Taylor, MI, reported Crain's Detroit Business (Nov. 19). The closure is the result of "an inconsistent supply chain, exacerbated by the unexpected loss of a deep water port where raw cane sugar was being delivered and unloaded," according to Michigan Sugar Co.

"Unfortunately, a perfect storm of forces beyond our control has resulted in the need to take action to control costs," Mark Flegenheimer, company president and CEO. The company lost use of a port it was leasing on the Detroit River, which allowed it to load large ships with sugar.

The Taylor plant processed between 80,000 and 100,000 tons of raw cane sugar yearly into liquid, specialty and brown sugars supplied to food manufacturers.

Tyson Foods Inc. is replacing its CEO as the pandemic boosted costs and clouded its outlook, reported read more