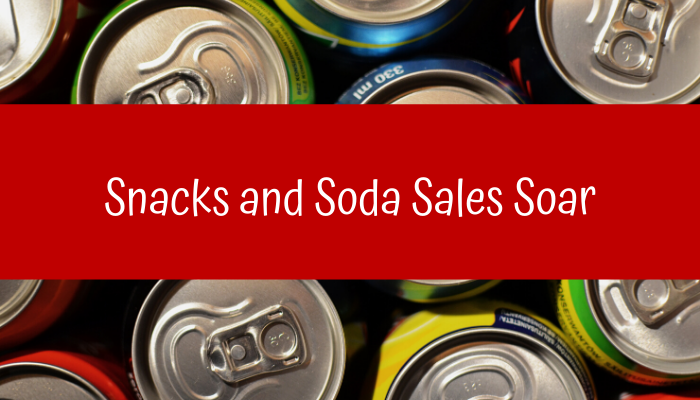 Although healthier food is on the rise, consumers are still buying their favorite snacks, chocolate, and soda.

In stores, shoppers bought more candy and other snacks, despite concerns that higher prices would hinder how much people bought. The company raised prices to offset increased costs for ingredients and to transport its products.

Sales of Hershey’s salty snacks in retail stores climbed 11.3%. In recent years, the company acquired the makers of brands such as Krave jerky, SkinnyPop popcorn, and Pirate’s booty cheese puffs. This set a precedence for it to introduce new products such as Hershey’s Popped Snack Mix—which contains popcorn, chocolate, almonds, and pretzels.

Hershey also attributed some growth to more advertising for its biggest candy brands such as Reese’s. Its North America advertising expenses were up 5% during the quarter.

“We continued investing in our brands,” commented CEO Michele Buck.

Rival snack producer Mondelez, whose portfolio includes brands such as Oreo and Nabisco, saw its comparable sales in North America rise 3.1% during the quarter, also thanks in part to more marketing.

Although the company expanded its portfolio by pushing into flavored sodas, coffees, teas, and low-sugar beverages, Credit Suisse analyst Kaumil Gajrawala noted it was reassuring the group’s core product still did so well.

“When the trademark Coke brand is up 6%...That’s one of the most positive indicators we have,” Gajrawala said.

Although it seemed to have flown under the radar, Coke is still planning a big rollout for the drink. “We’re putting the full marketing muscle behind our Coke Energy launch in the U.S.,” remarked CEO James Quincy during the fourth quarter earnings call.