Sep 6, 2018
Sanderson Hurt by Drop in Demand For Boneless Chicken
By Chris Campbell 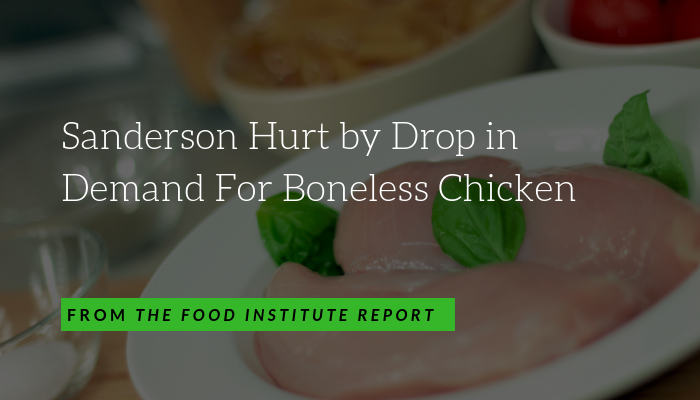 Sanderson Farms Inc. reported a significant counter-seasonal drop in demand for boneless chicken breast meat produced for foodservice customers in its third quarter. The company attributed the drop to a lack of chicken promotions at foodservice and retail grocery stores, an ample supply of competing domestic proteins and an increase of 5.8% in feed costs per lb. of chicken processed, reported MarketWatch (Aug. 23).

“I have never seen a scenario where beef and pork affected [chicken],” CEO Joe Sanderson said on a third-quarter earnings call Aug. 23. “I was wrong about that.”

Though Sanderson Farms did not specifically cite tariffs as a cause, it’s likely increased supply of domestic meat that would ordinarily have been exported was a contributing factor as well in the decline in third-quarter profits, reported Nasdaq (Aug. 23).

Some companies are cutting prices to keep meat cuts moving despite such trade barriers, while supplies housed in U.S. cold-storage facilities are approaching record levels.

Lean hog futures prices have dropped 26% so far this year at the Chicago Mercantile Exchange. In addition, huge new pork plants opening across the Midwest are competing for hogs and putting pressure on less efficient plants.

Mississippi-based Sanderson is moving ahead with plans to open a new poultry plant in Texas in 2019 that will boost its processing capacity by 9%. The company expects demand for poultry to continue to grow, although it may take longer than executives would hope.

The U.S. meat sector spans billions of chickens and tens of millions of hogs and cattle, and is tough to change quickly, says Vertical Group analyst Heather Jones. Some cattle producers already are shrinking herds as feedlots take losses, with more beef cows being sent to slaughter and fewer animals seen moving to feedlots during the rest of the year.